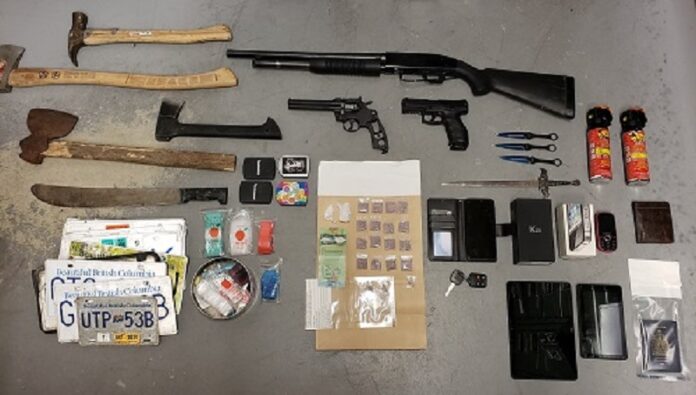 A Chilliwack RCMP drug trafficking investigation has led to the seizure of alleged illegal drugs, firearms and the arrest of one person.

In response to calls reporting illegal drug activity in the area of Trethewey Avenue received by RCMP in October, Chilliwack Community Response Team (CRT) officers gathered evidence linking a suspect and address to the investigation.

On the morning of November 17, CRT officers executed a Controlled Drug and Substance Act (CDSA) search warrant of an apartment in the 45000-block of Trethewey Avenue.

Police seized drugs believed to be fentanyl, firearms, paraphernalia linked to the sale of illegal drugs, a Ford Mustang and property previously reported stolen to police during the search.

RCMP arrested and later released a 46-year-old man from Chilliwack during the execution of the search warrant.

“CRT provides pro-active deployment to emerging community and public safety issues,” said Cpl. Brad Rendall Chilliwack RCMP. “Working together with our community partners is an essential component of this investigation.”

RCMP are reminding everyone who witnesses anything they believe to be suspicious in nature to contact police at 604-792-4611 or, should they wish to remain anonymous, call CrimeStoppers at 1-800-222-8477 (TIPS).