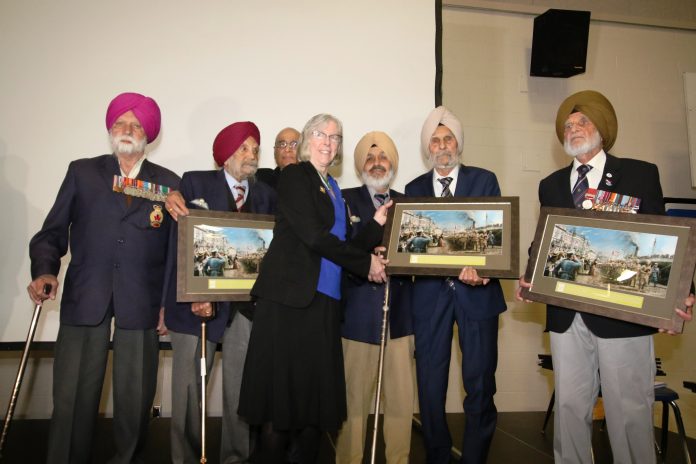 The multi-school presentation was put on by the Indus Media Foundation and L.A. Matheson school teachers Annie Ohana and Gurpreet Bains to recognize the contribution of Commonwealth soldiers to the Allied war effort in World War I.

This event brought together hundreds of students, South Asian veterans, including WW2 veterans, veterans’ families and members of the community in a unique commemoration ceremony.  The descendants of soldiers that fought alongside Canadians as brothers-in-arms in WW1 in France’s Pas-de-Calais region, where Vimy Ridge is located, participated in the event. They paid tribute to the forgotten British Indian troops that served the Crown in WW1.  Over 135,000 Indian troops fought alongside Canadian troops on the Western Front, in Battles that included at Ypres & St Julian, Festubert, Somme and Vimy.

As soldiers of the Crown, their wartime sacrifices were disowned by the Republic of India on achieving independence in 1947 and that heritage was subsequently also dismissed by Canada and other British Empire dominions as non-white history. This unique event attempted to restore this lost heritage as an important part of Canadian history; over 300,000 Punjabi troops hailing from the districts of the Komagata Maru passengers were sent to the various theatres of war as defenders of the Crown in WW1