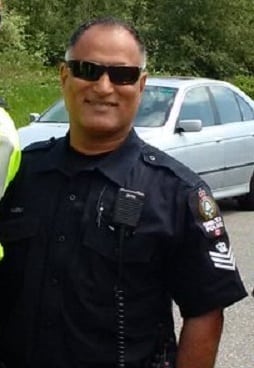 DELTA Police Inspector Varun Naidu has reportedly been suspended while the Saanich Police Department investigates his conduct in relation to interactions through digital messages and in person with women interested in policing, CTV News reported on Wednesday.

CTV said Delta Police confirmed the suspension and the investigation without naming Naidu.

“The Office of the Police Complaints Commission has oversight of this investigation,” Delta Police spokesperson Cris Leykauf said in a statement to CTV.

Back in 2014, when Naidu was a staff-sergeant, he was among those officers who were honoured at the annual Delta Police Awards Night. He received the Deputy Chief Commendations for the famous Project Gateway (drug investigation) that included 17 police officers of various police departments and two Crown Counsel. He also received a 20 Year Exemplary Service Medal.

A Delta newspaper reported last March that Delta Police Chief Neil Dubord and acting Delta Police Board Chair Pip Steele presented Naidu the appointment of his Police Officer Commission from the lieutenant governor at the police board meeting.