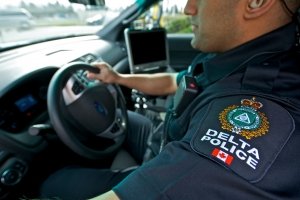 DELTA Police announced on Tuesday that in the first quarter of 2019 they saw most key statistics staying the course compared to last year, while there were a few increases in a couple of key areas.

The DPD has adjusted the 2018 statistics, to retroactively incorporate the new rules from Statistics Canada for all police agencies on reporting on offences categorized previously as unfounded.  The updated statistics now include offences where there is no credible evidence to confirm the incident did not take place. Formerly these offences were not included in DPD crime stats. By retroactively applying this same rule to all 2018 crime stats, and key three year indicators, DPD has a more accurate picture of local crime trends.

The number of traffic collisions was slightly higher than this time last year, with 308, compared to 298 in 2018. Collision numbers peaked in February, when the region experienced a few weeks of rather wintery weather.

The number of violation tickets handed out was virtually identical, with 2,965 handed out this year in the first quarter versus 2,959 last year.

Persons offences, which include crimes such as assault or sex assault, arson, robbery etc, increased to 218, up from 200 during the same time period last year.

“The majority of assaults that were reported to police involve individuals known to each other, and include domestic assaults,” said DPD Superintendent Harj Sidhu, Head of Operations. He noted the persons category of offences also includes incidences such as road rage, or assaults on medical professionals or loss prevention officers.

“We’re not seeing any patterns that would alert us to any public safety concerns” he said of the increase. “For example, we’re not seeing an increase in stranger assaults. And gang related violence remains uncommon here in Delta.” He pointed out that supervisors meet on a weekly basis to review stats and determine actions, while management meets monthly to discuss appropriate strategies to tackle emerging issues.

That said, the uptick in youth violence which Delta and other police forces across Metro Vancouver saw in 2018 has continued into 2019. Delta Police is addressing this issue by increasing youth preventative programming, such as the 3-on-3 basketball tournament, youth leadership and youth volunteering, while continuing outreach to ensure any youth conflicts don’t become bigger, with an active school liaison program.

The Residential B&E category has been renamed into Residential / Other B&E, to better reflect that the stats include break-ins to buildings such as sheds, storage containers and underground parking storage units. This category was essentially status quo, with a slight increase in the first quarter of 2019, with 54 files, as compared to 51 last year this time. Of those 54, 43 were home break-ins, as compared to the other part of the category.

Commercial B&Es climbed to a higher degree, with 44 files in the first quarter in 2019, compared to 34 last year. Since the fall 2018, there have been increases in these thefts – such as thefts of and from tractor trailers, particularly from businesses in the Annacis Island area and along the river near Tilbury. Police have responded to these thefts with increased patrols, and outreach to businesses to encourage greater security precautions. Additional investigative strategies are also being pursued. Businesses and personal residences that have security cameras are encouraged to register for the Delta Police Security Watch Program at https://deltapolice.ca/cwp/. This program simply creates a database which helps police know who might have video footage that could help solve a crime.

Theft from Auto has experienced a noteworthy increase in 2019, compared to the first quarter of 2018, up to 202, from 157 at this time last year. In comparison, in 2017 during this time frame there were 241 thefts from auto.

“This type of crime tends to be more cyclical,” said Sidhu. “During the first quarter we saw increases in the thefts of catalytic converters. That’s eased and now with the rise in gasoline prices we’re seeing a rise in theft of fuel, particularly from commercial premises. As for the public, the best step they can take is to remove all personal property from vehicles. If it’s not in your car, it can’t be stolen. Failing that, we advise people to at a minimum ensure any property is left in your trunk or out of sight.”

Past quarterly crime stats are online at https://deltapolice.ca/stats/ along with an updated crime map.