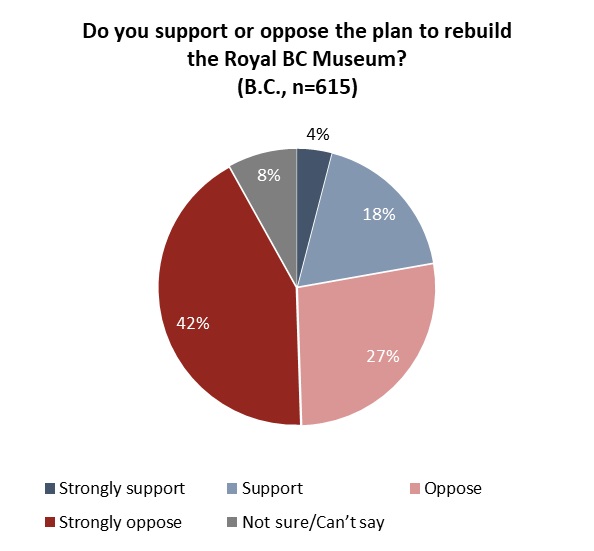 Presented with the five options the government reportedly explored for the museum, most (62%) would have proceeded with the status quo and not undertaken a rebuild of the famed museum in Victoria. One-in-five (18%) would have pursued the plan chosen by the government – building a new museum on-site, plus another facility off-site for artifacts at the cost of $789 million.

While the preservation of B.C.’s historical artifacts and displays resonates with some, the decision to proceed with the rebuild of the Royal BC Museum comes as many have criticized the lack of staffing in B.C. health care, and the skyrocketing cost of living in the province. Indeed, asked to identify their top priorities, cost of living (61%), health care (47%), and housing affordability (43%) dominate.

The performance of the B.C. government on many of those issues is heavily criticized. At least seven-in-ten say the government is performing poorly when it comes to each of these top three issues, with 87 per cent saying the NDP are doing a poor job on housing affordability, the highest mark in the country.

However, while Premier John Horgan has taken a personal hit, BC Liberal Leader Kevin Falcon has not received a countervailing boost. Currently one-in-four (23%) British Columbians view the opposition leader favourably, while one-in-three still have no opinion of him: 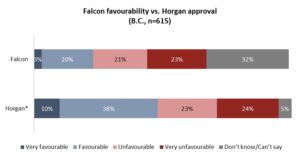 The political fallout from economic challenges and the unpopular Royal BC Museum funding decision may indeed be felt in the coming months, but the evidence thus far is that B.C. residents would still offer the NDP a considerable advantage if an election were held. An election is not scheduled to take place in the province until 2024: 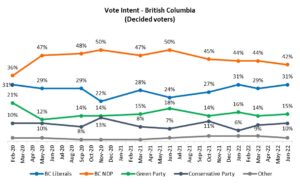 The Vancouver Plan will be presented to City Council on July...