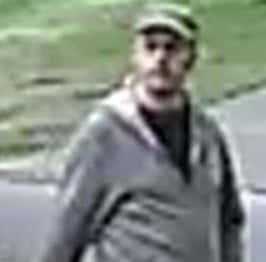 SURREY RCMP are asking for the public’s assistance in identifying an alleged suspect in a pair of sexual assaults that occurred in the Clayton Heights area of Surrey within seven days of each other.

On October 10 at approximately 5:40 p.m., Surrey RCMP received a report of a female youth

who was walking in the 18800-block of 65th Avenue when she was allegedly grabbed on the backside by an unknown male. The 11-year-old victim reported that when she reacted, the male apologized and quickly retreated from the area on foot. The victim returned to her residence and contacted police. While she was not physically injured, the victim was understandably upset by the incident. Officers were immediately dispatched to the area but were unable to locate the suspect.

The suspect was described as a white male, in his 30s, approximately 6’ tall, wearing blue jeans, a light coloured

shirt, and a light coloured baseball hat. He may have had stubble on his face as well.

On October 17 at approximately 7:50 a.m., Surrey RCMP received a report of a female student who was on her way to school when she was allegedly grabbed from behind and groped by an unknown male in the 18800-block of 69th Avenue near Clayton Heights Secondary.

The 15-year-old victim reported that she managed to free herself from the suspect and run back home. The suspect male fled on foot. Surrey RCMP General Duty officers were

immediately dispatched to the area but the suspect was not located.

The suspect is described as a white male, in his 30s or 40s, wearing a dark hoody and grey and blue washed out jeans. The victim was not injured.

Police said that in both instances the victims were able to provide descriptions of the assailant.  Subsequent neighbourhood canvassing by officers of the Surrey RCMP Special Victim’s Unit (SVU) located other witnesses and surveillance video of the alleged suspect. The updated description of the suspect is a white man, 30-40 years old, 5’10”-6’0”, 170-180 lb, with brown hair, thick eyebrows, full lips, long ears and lobes, facial hair and possibly wearing glasses.

“If you recognize any of the persons depicted in the stills or sketches, investigators want to hear from you right away,” said Cpl. Scotty Schumann.  “Our highly trained officers are working hard to solve these crimes.”

If they wish to remain anonymous, they should contact Crime Stoppers at 1-800-222-TIPS or www.solvecrime.ca.