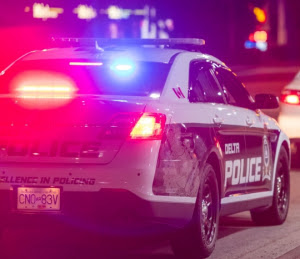 THE Delta Police on Friday announced that the Independent Investigations Office of BC (IIO BC) has concluded its investigation into the events of May 29, when Delta Police officers were called to investigate the theft of a taxi on the ferry causeway in Tsawwassen.  The suspect in the taxi theft died during this incident, and since his death occurred in connection with the action of police officers, it was investigated independently.

The IIO BC has concluded that despite all attempts to save his life, the affected person died of his own self-inflicted wounds. This conclusion was based on evidence collected from 15 civilian witnesses, video, audio recordings, autopsy reports and more. (Read the IIO report.)

“I’d like to thank the IIO for their diligent and thorough work on this investigation, and the public for their patience, in allowing this work to proceed,” said Delta Police Chief Neil Dubord. “I also want to express condolences on behalf of the department to the family and loved ones of the man who died in this incident.”

The IIO BC report indicates that some witnesses reported hearing what they described as gunshots that night. The IIO BC determined that no shots were fired by any officers, and the sound that was heard was likely that of a less-lethal 40 mm launcher, that shoots projectile rounds.

The autopsy revealed the suspect died of self-inflicted injuries to his neck. He had methamphetamine in his system.

The IIO BC reported that the first responding police officer involved in the incident acted lawfully, in execution of his duty, when he attempted to arrest the suspect for stealing the taxi, among other offences. The suspect was observed by police travelling at a high rate of speed and committed further offences as he approached police, including almost hitting the officer and his vehicle with the stolen taxi. The ‘near miss’ was verified independently by two civilian witnesses.

Witnesses also verified hearing police issue commands such as “get on the ground” ,“drop the knife” and “put your weapons away and get on the ground.” De-escalation attempts continued for over 15 minutes. The IIO BC determined “it was necessary and appropriate for officers to use force in an effort to get AP (the affected person/suspect) to drop the weapons and also to prevent him from inflicting further harm to himself.”

“Even though our officer’s actions did not contribute to this man’s death, incidents such as this have a lasting impact on the officers who respond,” said Dubord. “People get involved in this line of work to help others, and it’s a tragedy when despite all our best efforts, sometimes we’re not able to get some people the help they need.”