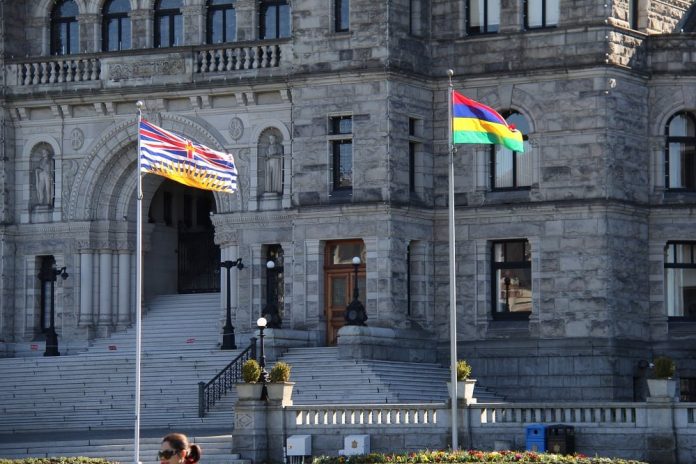 PEOPLE of Mauritius, an island nation in the Indian Ocean, along with Canadian friends and families, raised the flag of their country on the occasion of the Golden Jubilee Celebration of their Independence on the grounds of the BC Legislative Assembly in Victoria on Sunday, March 11.

The Independence Day of Mauritius falls on March 12 and the flag flew until the dawn of March 12.

Sousheela Ramsamy Sok Appadu, Executive Director of the Mauritian Canadian Multicultural Association BC that organized the event, said: “This day is a significant day for Mauritians in BC. The fact that we celebrated our Golden Jubilee with a flag-raising ceremony at the BC Legislature has given the Mauritian community much pride.”
Canada is home to approximately 35,000 Mauritians, with the largest population being in Montreal-Quebec followed by the Greater Toronto Area. The rest of the Mauritians are settled in Ottawa, Edmonton, Calgary, Vancouver, Saskatoon and Manitoba. Mauritians in Canada play an active role in settlement, education and community services. Being a bilingual (French and English) and multicultural community, they fully integrate themselves in the cultural diversity of Canada and take an active and significant role in the socio-economic development of this country.

The Mauritian Canadian Multicultural Association BC (MCMA), founded on September 13, 2017, is an officially registered, non-profit multicultural organization representative of the Mauritian community in BC and open to all British Columbians. They say their mission is to promote awareness of the cultural fabric of Mauritius in terms of music, food, festivals, language, and heritage and to create a vibrant and integrative community throughout BC and across Canada.

They say: “By so doing, we will also be enhancing the bilateral relations between Canada and Mauritius. We also provide general advice for prospective immigrants and help new newcomers to settle. We currently have more than 1,200 people connected on our Facebook page at www.facebook.com/bcmauritians and this number is growing rapidly every day. Our webpage is optimized to come up first on google if anyone types “Mauritian in British Columbia or Canada” keywords. Feel free to like our Facebook page and do not hesitate to contact us.”

Mauritius is an island nation in the Indian Ocean about 2,000 kilometres (1,200 miles) off the southeast coast of the African continent.

It is a multiethnic society, mainly of people of Indian (mostly Bihari), African, Chinese and European (mostly French) origin, according to Wikipedia. The estimated resident population of the Republic of Mauritius was 1,264,000 as of December 2016.

According to the 2011 census conducted by Statistics Mauritius, Hinduism is the majority religion at 51.9%, followed by Christianity (31.4%), Islam (15.3%) and Buddhism (0.4%). Mauritius is the only country in Africa to have a Hindu majority.