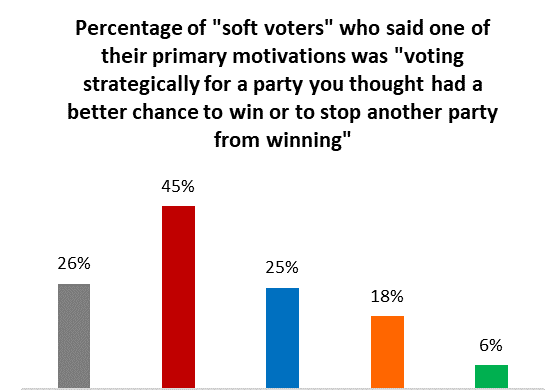 (This explains why Jagmeet Singh’s NDP did not get the seats they expected. Some have speculated that it was because of racism, but that is not true, in our opinion. It was all about strategic voting to keep the Conservatives from winning. – Editor’s Note)

IN the hours of ballot counting, as political commentators filled airtime and candidates nervously chewed their nails, a narrative of how one of the closest elections in Canadian history came to be emerged: strategic voting.

Though the struggling Liberals may not have captured the most votes, nor secured enough seats in the House of Commons for a majority, new data confirms they were able to successfully persuade enough voters to help their cause, even begrudgingly, rather than support another party which may have helped to elect the Conservatives.

A post-election survey from the non-profit Angus Reid Institute re-canvassed voters who were still considering their options, even into the late innings of the campaign. Their responses reveal that among those who voted strategically, most chose the party of Prime Minister Justin Trudeau.

The study also offers a glimpse of just how volatile the campaign was. Nearly one-quarter of late deciding voters (23%) say although they were leaning towards one party, they changed their minds and cast a ballot for another in the end.

* More than one-fifth (23%) of late deciding voters say they left their decision for the final day, while another 12 per cent say they settled on their candidate in the last couple of days

* Green Party and NDP voters are most likely to say that their vote was primarily based on the policies that the party put forth during the campaign, and the idea that they felt those parties best represented them

* Ultimately, half of late deciding voters (52%) said that they supported a candidate because they liked what they and their party offered, while half (48%) said that they simply disliked the alternatives more

THE B.C. Liberals on Monday said that when asked about the NDP’s poor record of providing full wraparound supports for people struggling with...
Read more

NDP says addictions can be helped with ‘a cup of tea’:...