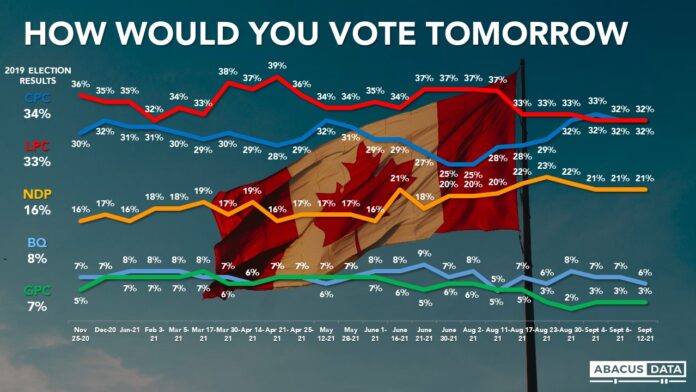 WE just completed a national survey of 2,000 Canadians eligible to vote in the current federal election completed entirely after the French and English leaders’ debates last week.

• In Manitoba and Saskatchewan, the Conservatives lead with 43% followed by the NDP at 24% and the Liberals at 18%.

• In Quebec, we see the Liberals ahead of the BQ by 7 points with the Conservatives at 17% and the NDP at 13%. This is a rise for the Liberals of 4 points and a drop for the BQ of 2 points.

The Conservatives lead among those who say they will definitely vote by 4-points (35% to 31%) This is largely unchanged from our last poll.

Asked which of four (most likely based on today’s numbers) outcomes they would prefer, 60% would prefer a Liberal victory (30% majority, 30% minority) while 40% would prefer a Conservative win (15% minority, 25% majority). This is mostly unchanged from our last survey.

Those who would prefer the LPC to win but think the Conservatives are going to win makes up 5% of the electorate – holding steady from last week.

The vote preference by change group is important to understanding the election. Among those who prefer change but say it isn’t that important to them (21% of the electorate at the moment), the Liberals have opened up a 13-point lead over the NDP with the Conservatives in third. Liberal re-election hopes continue to ride on how this group ultimately leans and Mr. Trudeau’s party seem to be gaining over timing.

Among those who say they want to keep the Liberals in office but it’s not important to them, 74% would vote Liberal compared with 9% who would vote NDP.

The survey was conducted with 2,000 Canadian adults eligible to vote from September 10 to 12, 2021. The margin of error for a comparable probability-based random sample of the same size is +/-2.1%, 19 times out of 20. This survey was paid for by Abacus Data Inc.