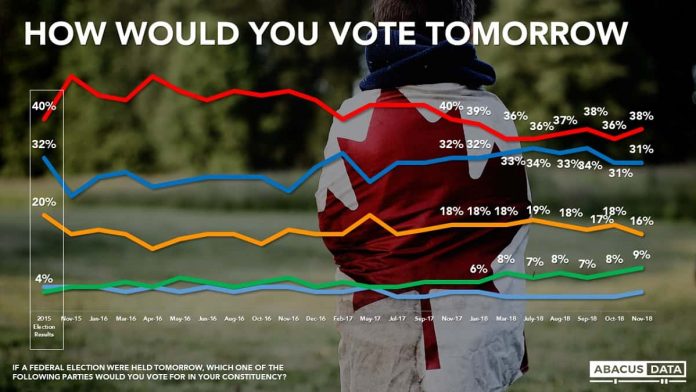 BY BRUCE ANDERSON and DAVID COLETTO

IN an election held tomorrow, 38% would vote for the Liberal Party, 31% Conservative and 16% for the NDP.

These numbers are similar to the levels of support each party found the last time Canadians went to the polls.

Liberal support has clearly strengthened in Ontario, likely caused by the after-effects of the provincial election. Frustration with Kathleen Wynne is obviously removed from the equation, and we see a 7-point rise in negative feelings towards Doug Ford on a month over month basis.

The trend lines in BC suggest the NDP is struggling to get traction and the Liberals are holding their own.

In Quebec, Liberal support has dipped, but is not coalescing around any single alternative –the NDP are splitting most of the “change” votes with the Conservatives and BQ.

Feelings about the performance of the federal government show approval levels up a few points from the spring, and disapproval has dropped 6 points over that period of time.

Similar patterns are evident in feelings about the Prime Minister.

As to which party leader Canadians would prefer to see as prime minister after the next election, Justin Trudeau bests Andrew Scheer by 16-points and runs ahead of his party while both opposition leaders underperform their parties’ popularity.

Regional patterns on this preferred PM question underscore that if an election were held now, and turned on how people felt about the leaders, Mr. Trudeau is in an even stronger position relative to his rivals than current vote intention numbers imply.

Last fall, winter, and spring were tough sledding for the Liberals. However heading into this winter, our data indicate the incumbents have stopped their slide and become more competitive, while both main opponents lack forward momentum, at least at this moment in time.

The Ontario election put dissatisfaction with Kathleen Wynne into sharp focus and likely kept downward pressure on the federal Liberal brand. Now, the question is whether Doug Ford is becoming something of a lightning rod in Ontario and may lead to some firming up of Liberal fortunes.

The Prime Minister’s popularity isn’t where it was a couple of years ago. However, he is running ahead of his party and considerably ahead of his rivals in terms of the impressions of voters. It’s not unusual for relatively new opposition leaders to trail on a “best PM” question, however, both of the opposition parties might have been hoping for more progress than is evident so far. As the discussion shifts from popularity to a choice of who people prefer to run the country, the data indicate the PM has more support than the party vote numbers suggest.

The results for the NDP point up some risk of voters deciding that 2019 might feel like a two-party race. Only 11% nationally (and only about half of NDP voters) say they would like to see Jagmeet Singh as Prime Minister next year. Unionized, feminist and environmentally oriented voters – each of which have been important parts of the NDP coalition – look like they may be tempted by other parties and leaders.

Our survey was conducted online with 1,500 Canadians aged 18 and over from November 9 to 13, 2018. A random sample of panelists was invited to complete the survey from a set of partner panels based on the Lucid exchange platform. These partners are double opt-in survey panels, blended to manage out potential skews in the data from a single source.

The margin of error for a comparable probability-based random sample of the same size is +/- 2.6%, 19 times out of 20. The data were weighted according to census data to ensure that the sample matched Canada’s population according to age, gender, educational attainment, and region. Totals may not add up to 100 due to rounding.