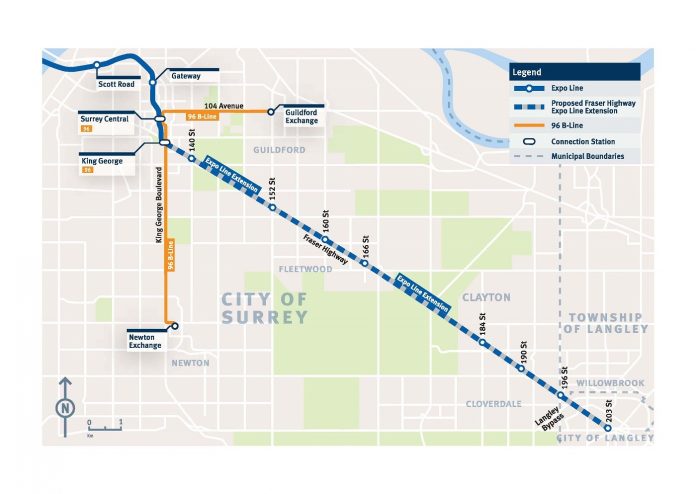 THE Surrey Langley SkyTrain project took a significant step forward on Thursday with the endorsement of the new rapid transit’s line business case by the Mayors’ Council. The City of Surrey has been growing at a tremendous pace, yet there has been no expansion of rapid transit since 1994. This new SkyTrain extension will bring SkyTrain’s fast, frequent, reliable, and convenient service to two of the fastest growing cities in the region.

“I am proud of what has been achieved in a little more than one year’s time,” said Surrey Mayor Doug McCallum. “The switch in technology from light rail to SkyTrain is no easy feat, but this is undoubtedly the right thing to do not only for Surrey, but for the region as a whole. Since its introduction for Expo 86, SkyTrain has been a swift, reliable and accessible platform to move people in the Lower Mainland. I want to thank my colleagues on the Mayors’ Council for their support and for their recognition that rapid transit expansion South of the Fraser is long overdue. I also want to commend both City and TransLink staff for delivering the business case for this project in record time. When I was running for Mayor, bringing SkyTrain to Surrey was a major plank of my campaign platform. Today is proof that I keep my promises.”

With the business case completed and in the hands of senior government, final approval is anticipated by summer, triggering procurement later this year, construction beginning in early 2022 and the new system running by 2025.

There is strong support for the SkyTrain extension in Surrey, especially built in one stage and on an expedited basis.

The City says, “We’ve kept our promise. Surrey’s SkyTrain extension is on track.”

Project schedule is right on pace and the City has been working closely with TransLink to meet the aggressive timelines set in the Workplan a year ago.

The City says it is hard at work ensuring that growth along the corridor follows its Smart Development Principles, delivering planned population and job growth through transit-oriented densification around station areas.