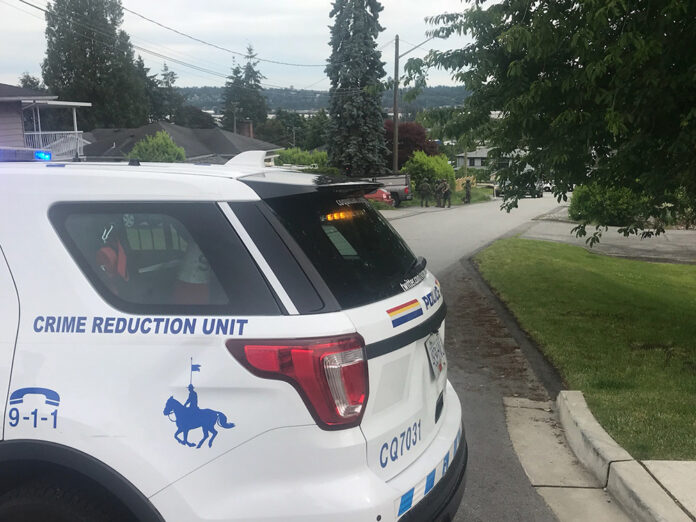 ONE person is in custody, and four others were arrested and later released, after Coquitlam RCMP’s Uniformed Crime Reduction Unit (UCRU) executed a search warrant on a house in the 200-block of King Street.

“We’ve attended this house or investigated related files more than 50 times this year,” said Cpl. Michael McLaughlin. “Since Coquitlam RCMP UCRU had information about potential firearms in the house, we called in the Lower Mainland Integrated Emergency Response Team to make the safest possible entry.”

The warrant was executed just after 5 p.m. on Wednesday and, by the time the search was over several hours later, three men and a woman had been arrested and released. In addition, a 35-year-old man was arrested and held on two outstanding warrants. Nobody was injured during the arrests.

The evidence seized during the warrant included:

* An improvised firearm or ‘zip-gun’

* A prohibited knife and an extendable baton

* Stolen mail and other stolen property

* A credit-card press and equipment used for making identification documents

“The next stage in the investigation is to review the large amount of evidence seized and determine what charges may be appropriate,’ said McLaughlin. “Now that we’ve been inside, we’re also calling in the City of Coquitlam Bylaw Enforcement. We have concerns that the house is not being occupied safely.”

If you have concerns about criminal activity in Coquitlam RCMP’s jurisdiction, call the non-emergency number at 604-945-1550. Information from citizens is an important part of how police direct crime prevention resources.

Driver arrested after driving over spike belt and fleeing in New...