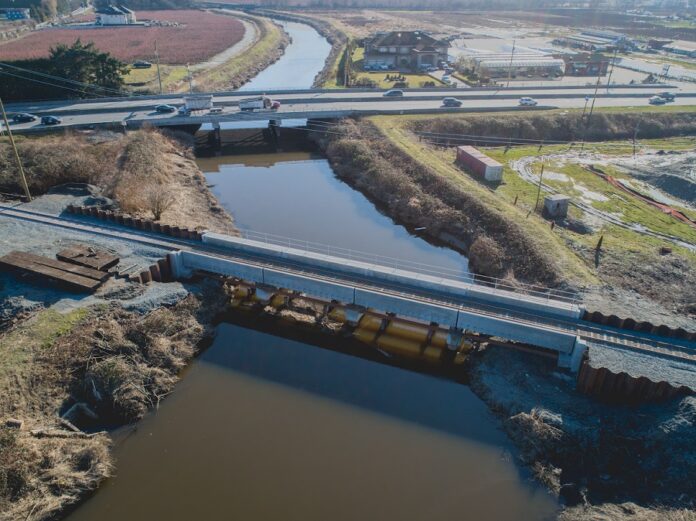 THE City of Surrey on Thursday announced the completion of the Serpentine Railway Bridge replacement project, the first of 13 project components to be partially funded through the Government of Canada’s Disaster Mitigation and Adaptation Fund (DMAF).

In 2019, the City secured $76.6 million in federal funding to supplement a series of projects to reduce Surrey’s coastal flood risk and adaption to sea level rise. Work began quickly with Southern Railway of British Columbia to replace the 58-year-old 40-metre long timber railway bridge, which was vulnerable to overtopping and damage.

“Our historic investments in infrastructure are helping build communities such as Surrey, and making them more resilient to flooding in a changing climate,” said Catherine McKenna, federal Minister of Infrastructure and Communities. “It’s gratifying to see such concrete progress on Surrey’s multi-year flood resilience plan, and we look forward to continuing to work together to build a better, more prosperous, and more resilient British Columbia and Canada.”

“This new crossing acts as an insurance policy for the movement of goods and the protection of agriculture production in the area,” said Surrey Mayor Doug McCallum. “By investing in infrastructure now, we are protecting our community, economy and environments from future flood risks. We thank the Government of Canada, Southern Railway of British Columbia, and the many partners who supported this important project.”

Southern Railway of British Columbia moves approximately $190 million of freight across the Serpentine Rail Bridge annually, driving the Canadian economy by providing businesses in the Lower Mainland and Fraser Valley with rail connections to markets across North America and internationally.

“The completion of the Serpentine Railway Bridge marks a great step forward in shoring up our community against the increasing threat of natural disasters,” said Sukh Dhaliwal, MP for Surrey–Newton. “By investing in resilient infrastructure, we are making sure our neighbourhoods, businesses, and families can thrive for years to come.”

Gerald Linden, President of Southern Railway, praised the successful completion of this project as a reflection of what collaboration can accomplish. “The benefits from the new Serpentine Railway Bridge will endure for generations. We appreciate the City of Surrey’s partnership and we are proud of the many Southern Railway employees who contributed to this achievement.”

The new bridge also ensures safe passage for Surrey’s Heritage Rail and enables Surrey to realize the full benefits of the Serpentine and Nicomekl Food Control Project, which began in 1997 to improve flood control of agricultural land.

The Province has advised municipalities to plan for one metre of sea level rise by 2100 and two metres by 2200. Following a comprehensive planning process and extensive engagement, Surrey finalized its Coastal Food Adaptation Strategy (CFAS) in 2019. CFAS outlines Surrey’s plan to increase community resilience, safety and health regarding flooding and climate change for the short and long term.

Twelve additional project components will be supplemented by DMAF in Surrey, which include dyke and road upgrades, sea dam and bridge replacements, storm sewer upgrades, nature-based solutions and further infrastructure investments. These components will take place over the next 8 years, with a completion plan of 2027.