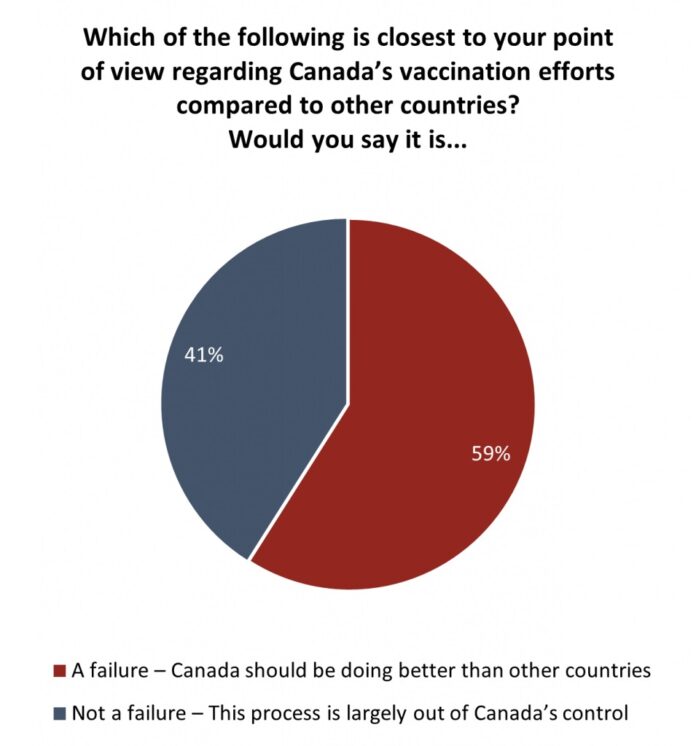 AS Canadians watch allies such as the United States and the United Kingdom surge ahead in vaccine delivery and witness Prime Minister Justin Trudeau seek help securing doses of the COVID-19 vaccine from developing nations such as India, people in this country are experiencing the relatively unusual sensation of their country falling behind.

Amid delays and organizational frustrations, the latest public opinion study from the non-profit Angus Reid Institute finds Canadians are more inclined to see the current situation as one of failure on the part of the government rather than due to travails largely out of its hands.

Three-in-five (59%) say that Canada should be performing better than or at least as well as well as other nations in the amount of vaccine it has administered. The rest (41%) offer more sympathy to those in charge of procurement and are of the view that recent setbacks have been out of anyone’s control.

Few Canadians now expect Prime Minister Justin Trudeau’s promise – that anyone who wants a vaccine will get one by September – will come to fruition. Indeed, they express skepticism that this is an achievable target by a margin of more than three-to-one over those who say all jabs will have been given to those willing by the time autumn begins.

Registering for COVID-19 immunization helps put the pandemic behind us: Fraser Health

Most unvaccinated Canadians uncomfortable with AstraZeneca