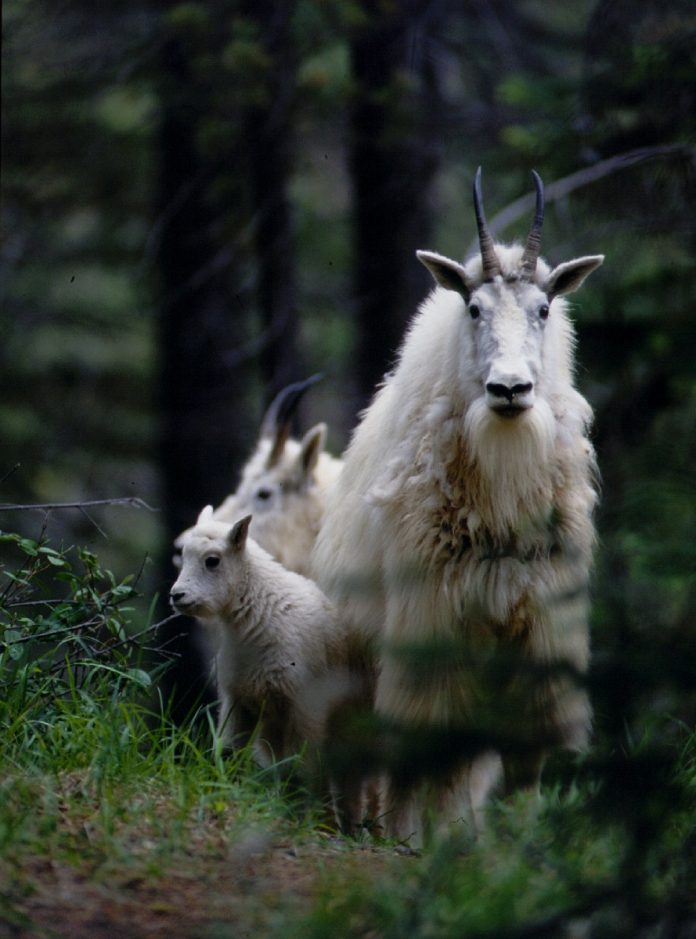 KEREMEOS: These days, sports reporting is full of stories about one GOAT or another – as in the “greatest of all-time.” This is a story about actual goats.

More than half of the world’s mountain goats are found in B.C., living in rugged mountainous terrain and scattered throughout the province. Cathedral Provincial Park, located southwest of Keremeos along the Canada-U.S. border, is home to approximately 30 mountain goats, making it one of the smallest populations in B.C.

For the last five to seven years, the goats have scampered down a steep ridge and headed for the backcountry campground of Quiniscoe Lake in Cathedral Park. Drawn to the salt found in urine and sweaty clothing from hikers, the campground has become a reliable mineral lick for the mountain goats searching for essential nutrients. But it also creates potential for human-wildlife conflict.

Kirk Safford, a conservation specialist with BC Parks, admits not much is known about the goats. This is why scientists and Lower Similkameen Indian Band technicians captured and collared 10 goats in late June and early July.

The collars, which will last three to four years, send out a GPS signal every six hours so researchers can record where the goats are wandering. The goal is to learn more about the goats’ habitat use and identify winter range to help address management issues in the park.

Researchers have already seen one goat move 10 kilometres within 12 hours, then stay in the same area for a week. It then moved another 12 kilometres in 24 hours, catching Safford off guard.

“It’s very exciting. We’re seeing movements that we had no idea about,” said Safford, noting the collars will also show the goats activity around the campground, allowing park staff to monitor goats that are aggressive towards people.

“Goats exert dominance over each other around mineral licks because it’s such a highly sought-after resource. You put people into that mix in a campground and it poses a risk to both people and the animals. We want to avoid that kind of conflict in a park.”

So far, there has not been any reported incidents of goats being aggressive towards people in Cathedral Park. However, some have exerted their dominance by refusing to move off trails. Safford said the best way to prevent goats from coming into the campground in the first place is to remove attractants by having park visitors use pit toilets and store sweaty clothing inside tents.

“In a park setting, we want wildlife to be as natural as possible and behave naturally. As long as the salt is there, they will come back,” Safford said.

The Cathedral Mountain Goat Project is being supported through the BC Parks Licence Plate Program. So far, more than 150,000 specialty licence plates have been sold, generating more than $4.1 million for programs and projects related to conservation, community engagement and Indigenous relations.

This year, approximately $400,000 from the program is going towards wildlife inventory and projects for managing human-wildlife interactions. An inventory of mountain goats is also taking place in Kwadacha Wilderness Provincial Park, located approximately 160 kilometres southwest of Fort Nelson.