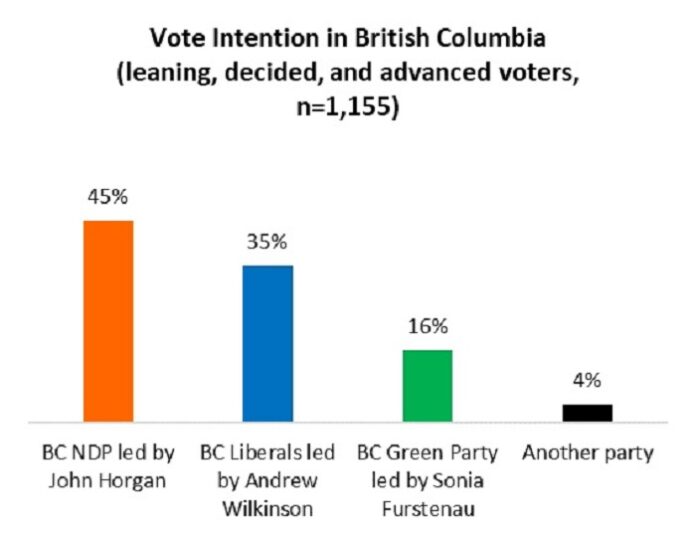 Only 22 per cent want a Liberal majority; Liberal leader Andrew Wilkinson’s net momentum has crashed since the writ was dropped

THE latest data from the non-profit Angus Reid Institute shows that the NDP continues to hold a comfortable lead but has shed a handful of points to the BC Liberals and BC Greens.

Since last week, support for the party has dropped four points (45% now versus 49% last week), while the BC Liberals have picked up two points (35% versus 33%). The Greens are also up two points to 16 per cent.
In terms of preferred election outcome, voters are split between wanting an NDP majority (35%) an NDP minority (23%) and a Liberal majority (22%).

According to the Angus Reid Institute, the results suggest that those who have already voted – a group more heavily concentrated in Metro Vancouver and on Vancouver Island – overwhelmingly supported the NDP.

By contrast, among those yet to vote – more likely to be found in Northern and Interior BC and the Fraser Valley – the race is much more competitive, with voters almost evenly divided between the NDP and Liberals.

Asked who would be the best premier for the province, just under half (45%) choose NDP leader John Horgan, while fewer than half as many choose BC Liberal leader Andrew Wilkinson.

Horgan is chosen as best by 79 per cent of his voters, while half of BC Liberal voters (52%) say the same of Wilkinson. Just under half of Green voters favour party leader Sonia Furstenau.

In terms of momentum, BC Green Party leader Sonia Furstenau has improved the most in the eyes of British Columbians since the start of the campaign. She is the only party leader for whom positive public opinion has increased rather than declined during the campaign period. Notably, Liberal leader Andrew Wilkinson’s net momentum has crashed since the writ was dropped.

There is significant variation across the province. The NDP fare best in the urban core of Metro Vancouver, garnering support from 54 per cent of voters. In the Interior, by contrast, the BC Liberals hold an 18-point advantage. The BC Green Party performs best on Vancouver Island and the North Coast, where its voter support rises to 25 per cent.

Demographic differences stand out as well. Women of all ages prefer the BC NDP to the alternatives, while men over the age of 34 lean slightly toward the BC Liberals. Green Party support is relatively constant across demographics.