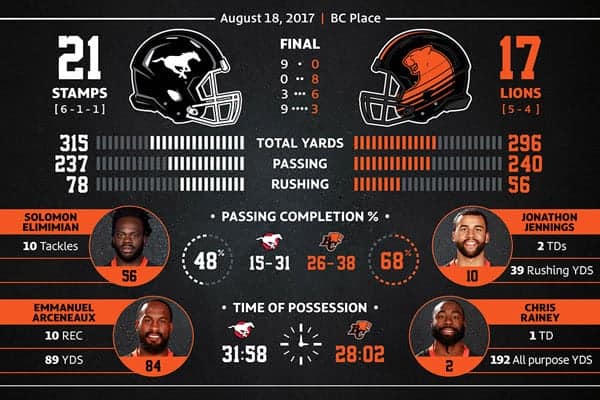 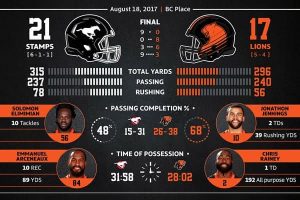 IT was a similar story early on and almost a remarkably different ending. At the end of the day, the result was the same and no excuses were made after the BC Lions (5-4-0) fell 21-17 to the Calgary Stampeders (6-1-1) on Friday night at BC Place Stadium.

Just like last week in Saskatchewan they could not muster a first down until the second quarter and although they eventually found their groove, the offence knows this effort is simply not good enough.

“There is too many physical mistakes, ” explained Jeremiah Johnson in a rather crestfallen home locker room.

“I need to catch the ball on that interception and it goes all the way around to everybody pretty much. We just need to start finding ways to win ball games, man. We faced a team that was totally disciplined, didn’t make too many mistakes and we have to be just like that. Now we have to just come out more sound on offence.”

The miscue Johnson referred to was an interception to Alex Singleton deflected off his finger tips and was returned 40 yards to the Lions 27-yard line. It led to three points for the visitors who opened up a 9-0 lead before Jonathon Jennings‘ one-yard touchdown plunge and two-point conversion to Chris Williams made it a one-point game at half.

“At the end of it, the game was there for the taking.”

Jerome Messam‘s one-yard touchdown run to open the fourth quarter was the eventual winning score and the Lions’ attempt at a game-winning drive was stopped short when Chris Rainey couldn’t quite reach the first down marker on a third and five passing play with 16 seconds left.

“Was the ending appropriate? Run the route at six yards and not five,” added Buono on the failed third down play.

“You have to take care of those little disciplines. You can’t get holding (penalties), you can’t do those kinds of things. If you do, when you play a good team you’re going to lose.”

Jennings improved his effort from last week’s debacle in Regina, passing for 240 yards and a touchdown to Rainey. In the end, those early miscues will be the ones that will cause him and the offence to scratch their heads as they begin preparing for next Saturday’s road game in Ottawa.

We have talked in the last couple weeks of the importance of utilizing Johnson and the ground game. This loss tonight will be looked at as a missed opportunity in that regard.

“We gotta run the ball, its plain and simple,” said the Lions’ feature tailback.

“We gotta have an equal amount of this and that. When that happens you get the defence trying to figure things out. We had opportunities, but things just got away from us.”

Johnson and the Lions are one game worse than they were at the halfway point of 2016 when they finished 12-6 and second place in the Western Division. Getting behind the eight-ball against Calgary and Edmonton may make things tougher in the second half, although Johnson is confident the best is yet to come.

“We’re a good, resilient team and we know what we have in the locker room. I just think we all have to believe it. We know who we are, we know we’re good and we’re just showing up. We need to prove it next week.”

A third quarter sack by Craig Roh was nullified on a questionable roughing the passer call on Bo Levi Mitchell. Buono indicated he wanted a further explanation from the league office. The play was challenged and upheld. Instead of pinning Calgary for a 17-yard loss and forcing them to punt from their own 15, they were given a new life and marched down to kick a field goal. Those three points turned out to be huge. Another key moment was when Mitchell found Anthony Parker for a 56-yard connection that helped set up the Messam major.

0- when you factor in that penalty, the number of quarterback sacks by the defence. Getting pressure on the quarterback will still be a big talking point.

4– the number of offensive series’ before they picked up a first down and the consecutive number of losses to Calgary. That streak includes last November’s Western Division Final at McMahon Stadium.

5– The number of pass knockdowns by an opportunistic Calgary defence.

68.4– completion percentage for Jennings as he did his part to try and help the squad to a comeback.

“We were fighting off rust once again. We just have to keep on correcting things and making sure that we’re all in sync. I have to get the rust out of me, continue to work in practice, get these reps. and work with the guys.”- Jennings once again taking ownership for the lack of production.

One thing they will regret is not taking advantage of a rare “off” night for Mitchell. The Calgary pivot completed less than 50 percent of his passes (15/31) and failed to throw a touchdown pass for the first time since August 13th of last season, a span of 17 regular season games.

You have to feel for Ty Long. Not only did his missed convert change the outlook for the finish, but also he had a punt blocked for the second time this season. That latter play in the second quarter led to one of five field goals for Rene Peredes.

Hat tip to the offensive line for a much better effort, which Jennings saluted in his post-game interviews. The move of Antonio Johnson to left tackle, at the expense of Hunter Steward, was a gamble that paid off.

Another sequence where they could have helped their cause came after a Loucheiz Purifoy interception in the final minute before halftime. They could have gotten into field goal range for a potential half time lead before Jennings through his second interception of the night to Ciante Evans.

You can always count on Solomon Elimimian to give it his all. He had yet another double-digit tackle performance, leading his defence with ten defensive stops. The unit should be commended for keeping it close and forcing all those field goal attempts early.

Had you told the group they would be 5-4 at the halfway mark, it probably would have been cause for disappointment. After all, expectations were high after the remarkable turnaround of 2016. There is plenty of football left, but a win next week in Ottawa is all but essential at this point. Dropping to .500 in this competitive division would not be cause for optimism going into their bye week.