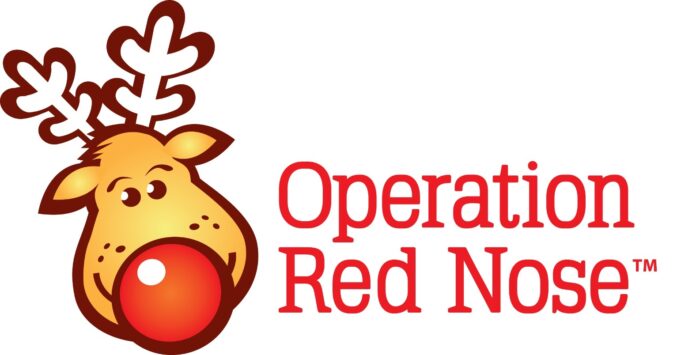 AFTER a year of absence on the road, Operation Red Nose volunteers will return to service in Kamloops until December 31. On New Year’s Eve, they won’t be alone to hit the road with their red vests since the regions of Burnaby, New Westminster, and Tri-Cities (Coquitlam, Port Coquitlam and Port Moody) will also be operating on December 31.

By visiting the Operation Red Nose website, clients and volunteers will be able to see dates and hours of operation for their region, as well as a host of other relevant information. Amongst other things, volunteers can download an application form at operationrednose.com to register and take part in the safe ride campaign.

In these unusual times, the organization says it has put in place all necessary measures to ensure the safety of volunteers and clients, including wearing a mask and showing a proof of vaccination. Operation Red Nose wishes to offer a safe experience to all volunteers, as well as to anyone using the service.

Using Operation Red Nose’s safe ride service to get safely home not only helps to keep roads safer during the holiday season, but it also helps raise funds for youth and amateur sport. donations raised during the safe ride campaign are turned over to those organizations who host the campaign in their community. In Kamloops, donations go to PacificSport Interior BC and in Burnaby, New Westminster, and the Tri-Cities, donations help support KidSport. That is why the involvement of volunteers, as well as the generosity of partners and clients, are all ingredients that have made Operation Red Nose a success for the past 25 years in British Columbia, notes the non-profit organization that promotes responsible behaviour to help prevent impaired driving.

Operation Red Nose will also be present online with a road safety awareness campaign. During the month of December, the organization invites the population to follow their Facebook page and discover various posts and online initiatives. True to itself, Operation Red Nose will use the humorous and non-judgemental approach that has built its reputation over the years to encourage responsible behaviours after consuming or if one is fatigued.

Operation Red Nose says it could not pursue its mission in British Columbia without the support of the Insurance Corporation of British Columbia (ICBC). “ICBC is always proud to support the mission of Operation Red Nose and contribute to helping make roads safer during the holiday season,” says Aileen Shibata, Road Safety Program Manager. “We’ve been by Operation Red Nose’s side for the past 25 years because we strongly believe that this movement makes a real difference in our communities. We would like to acknowledge the thousands of dedicated volunteers without whom the success of this operation would not be possible.”

​​​​​ICBC: More drivers admit to using their phone while driving