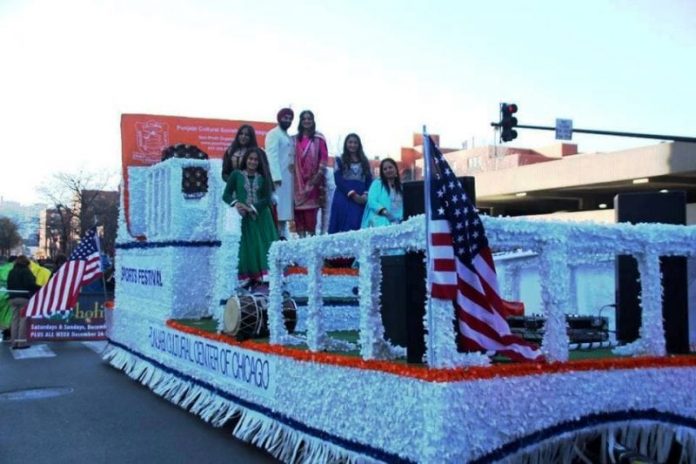 CHICAGO: The Punjabi Cultural Society of Chicago (PCS) participated once again in the McDonald’s Thanksgiving Parade held on Thanksgiving Day (November 23) on State Street in the heart of downtown Chicago. McDonald’s Thanksgiving Parade is the biggest parade in Chicago and the city’s premier holiday event.
About 5,000 performers, with floats, balloons and marching bands, traveled north from Congress to Randolph for three hours, starting at 8 a.m. Highlights included Chicago rapper Twista, Miss Illinois 2017 Abby Foster, critically acclaimed chef Graham Elliot, the Blackhawks mascot Tommy Hawk, the Harlem Globetrotters and a very special visitor from the North Pole, the star of the show – Santa, who shared words of wisdom about how to be on the nice list. Ronald McDonald was the grand marshal this year.

More than 1,300 people volunteered to run the parade and help manage the masses that turned out. Security was tight, but the thousands of spectators packed on both sides of the parade route to kick off the holiday season were in high spirits.

For a mile down State Street, from Congress to Randolph, spectators were awed by the parade, which included 36 specialty units, 18 marching bands, giant popular inflatable balloons, decorated floats, 16 spectacular stage performances, and more horses than you could ask for.

“PCS has been participating in this parade since 2005. It gives our community great exposure in the mainstream, and it shows our commitment to celebrate the American festivals in solidarity with the American people,” said PCS President Sukhmel Singh Atwal.

“The theme of the PCS float and its contingent was an Indian Maharaja wedding procession (Baraat), which included the bride and the groom in traditional Punjabi wedding outfits, the baraatis in festive ethnic costumes, Punjabi Dhol (drum), amplified Bhangra music and dancing on the street interacting with spectators, all in the spirit of celebration,” said Rajinder Singh Mago, PCS Board of Governors and coordinator of the PCS participation in the parade.

Kevin Atwal and Ajay Randhawa played the Bhangra Dhol drum. Punjabi Bhangra dancers from UOC Bhangra team entertained the crowds. Bhangra music blasting from the float made the cheering crowd clap and tap their feet to the beat. Mona and Manjeet Bhalla played the bride and the groom in their wedding outfits.
McDonald’s Thanksgiving Parade celebrates 84 years of Chicago holiday tradition this year. Originally called the “Christmas Caravan” in the 1930s, the Parade was created in 1934 to help lift the spirits of residents suffering through the Great Depression. It was an effort to stimulate the economy and cheer up Chicagoans. Since then the annual Parade has evolved into a high-quality family fun event and a full-scale holiday spectacle and cherished tradition for Chicagoans and other Americans alike. It attracts hundreds of thousands of spectators on the street and millions watch on TV at home.

The parade was televised live on WGN Channel 9 and WGN America from 8 to 11 a.m. and rebroadcast on CLTV the same day 1-4 p.m. with millions watching from across the country. It was also streamed live on the internet for worldwide viewing.

The Chicago Festival Association (CFA), http://www.chicagofestivals.org/ a unique and exciting nonprofit organization in the city of Chicago, produced this McDonald’s Thanksgiving Parade.

Punjabi Cultural Society of Chicago (PCS) is an all volunteer nonprofit organization promoting education, good citizenship, community development, civic commitment and involvement, and preserving Punjabi culture, language, sports and performing arts among its community members and also among mainstream Americans in the Midwest and beyond. PCS caters to this need both by directly organizing events that bring community members together from all over the Midwest region, and by facilitating participation of its community members in mainstream activities.