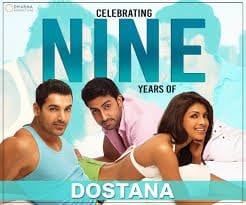 The “Quantico” actor took to Twitter and posted,”It’s nine years of ‘Dostana’, the movie that’s forever made me the ‘Desi girl’.”

“Wait a second… Thought John and I were the Desi Girls…” replied Abhishek.

“Forgot to celebrate yesterday… so here is to my ‘Dostana’ with Priyanka Chopra, Abhishek Bachchan and John Abraham that has lasted for Nine years one day… And counting!” posted director Mansukhani.

Released in 2008, “Dostana” was the story of two men who pretend to be a gay couple in order to secure an apartment.

Both fall in love with the same girl and strive to win her heart, only to realise that she loves someone else.