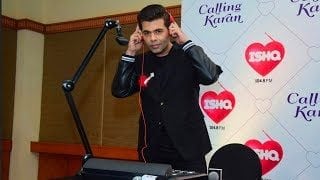 Mumbai (PTI): Karan Johar said when it comes to his films, romance is not limited to the characters he etches for the celluloid but the director said actors have often fallen for each other on the sets of his movies.

The 45-year-old filmmaker said he can easily recall actors on his sets falling in love “more than five times”.

“Yes, it happens all the time. It has happened more than five times, I can assure you. People fall in love, it’s the industry of love,” Karan said.

The director added the off-screen romance has never interfered in the making a film but has only “enhanced it”.

When quizzed if he has a policy that actors are not allowed to date each other while working in the movie, Karan said, “No not at all. I love it. I don’t believe you can ever (control) anyone’s personal life. We are here to work, make movies… What people do in their personal capacity is entirely their thing.

“In fact, if they fall in love it’s great. If it’s legit and lovely… it’s fine. Even if it’s not, it’s their problem.”

The filmmaker was speaking at the launch of his radio show, “Calling Karan” for Ishq FM.