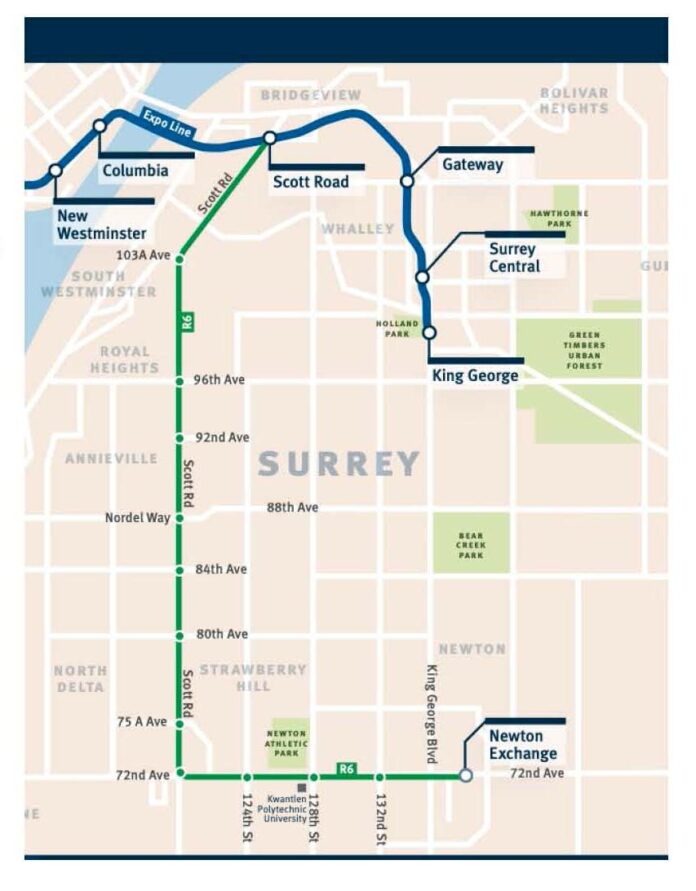 BUILDING on the success of current RapidBus routes, TransLink in partnership with the cities of Surrey and Delta, is planning for the R6 Scott Road RapidBus. This service will bring faster, more frequent and reliable service to the Scott Road Corridor.

TransLink says customers on the R6 RapidBus will enjoy service that’s at least 20% faster than local bus service. Time savings will be achieved through bus priority on roadways, such as dedicated bus lanes and signal priority, less frequent stops and all-door boarding.

The R6 RapidBus route will mirror the existing 319 route. Route 319 will remain in place to provide frequent local service and will benefit from reduced travel times and the street changes TransLink is making. The 12 other routes that run on a portion of the corridor will also benefit from the proposed road and transit priority changes.

RapidBus has the capacity to move 12,000 people per hour during rush hour. With full buses, that’s the equivalent of taking 34 ferries worth of single-occupancy cars off the region’s roads during rush hour.

RapidBus features better customer amenities such as more sheltered stops, real time information and even cushier seats. Customers will also have accessibility features at stops, such as text-to-audio functionality of the digital bus-arrival information and tactile pads.

TransLink will host two virtual public information sessions during the engagement period – Wednesday, September 22 from 6 to 7 .m. and Saturday, September 25 from 10 a.m. to 11 a.m.

The public are invited to complete a short survey.

Throughout the engagement, customers will be able to find information at translink.ca/R6 and to share feedback via: