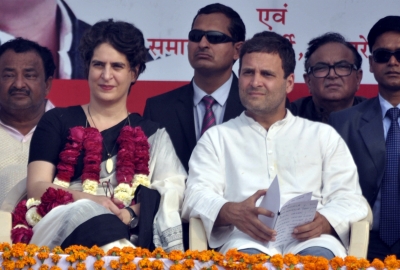 New Delhi (IANS): Former Congress President Rahul Gandhi and Congress General Secretary Priyanka Gandhi on Sunday took a dig at the economic performance of the Modi government after the completion of 100 days in office.

Rahul in a sarcastic way first congratulated Prime Minister Narendra Modi for completing 100 days and then launched a scathing attack on Modi for the economic slowdown the country is facing today.

In a tweet, Rahul Gandhi said: “Congratulations to the Modi Govt on #100DaysNoVikas, the continued subversion of democracy, a firmer stranglehold on a submissive media to drown out criticism and a glaring lack of leadership, direction & plans where it’s needed the most – to turnaround our ravaged economy.”

Congress General Secretary Priyanka Gandhi also attacked Modi government and said that the government is still silent on the issue of economic slowdown and is hiding the truth from people through drama, deceit and lie.

In a tweet in Hindi, Priyanka said: “Government is sitting silent on economic slowdown. The buisness has been stalled as companies are in trouble. From drama, deceit, lie, and publicity they are hiding the critical condition of the country from people.”

MEANWHILE, the Modi government avoided any mention of the economy in its take on 100 days of Modi’s second term.

Union Information and Broadcasting Minister Prakash Javdekar on Sunday asserted that the 100 days of the Modi2.0 government were “full of unprecedented decisions and moves”.

Speaking on the occasion of completion of 100 days of the second term of Prime Minister Narendra Modi’s government at the Centre, Javadekar said the biggest decisions taken include abrogation of Article 370 and 35A, bifurcation of Jammu and Kashmir in to two Union Territories — Jammu and Kashmir with an Assembly and Ladakh without one.

Besides, the ammendment to the Unlawful Activities (Prevention) Act that paved the way for declaring Lashkar-e-Taiba (LeT) chief Hafiz Saeed, Jaish-e-Mohammed (JeM) chief Masood Azhar, LeT’s supreme commander of operations in Kashmir Zaki-ur-Rehman Lakhvi and fugitive underworld don Dawood Ibrahim, all based in Pakistan, as terrorists.

The Minister said that the decisions were related to public welfare, public participation, against the terrorism and other issues.

Javadekar also released a booklet on completion of the 100 Days of the government titled “Hundred Days of Bold Initiatives & Decisive Actions”.

“The decisions taken within 100 days of Modi 2.0 government [were] never ever taken by any government…The 100 days were full of decisions.”