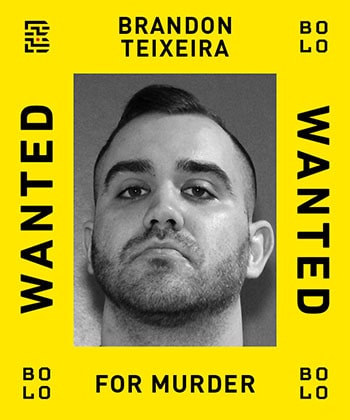 THE Integrated Homicide Investigation Team (IHIT) is seeking public assistance to locate and arrest 27-year-old Brandon Nathan Teixeira for murder and a combined financial reward is now offered for information that leads to his arrest.

IHIT announced on Wednesday it will be stepping up its efforts to locate Teixeira and is partnering with CrimeStoppers and the Bolo Program, which will be launching an amplification campaign through new technology and communication channels  that will hopefully lead to his arrest.

The Bolo Program is a Canadian public safety innovation project which has partnered with several law enforcement agencies since its inception in 2018. Its mission is to encourage citizens to be on the lookout for Canada’s most wanted so they can help keep communities safe by submitting tips to assist the police to arrest these suspects. The program acts as an amplifier for the priority most wanted notices of Canadian police services, also assisting them and their community partners like CrimeStoppers to offer the right incentives for members of the public to submit tips. For further information on the Bolo Program, visit www.boloprogram.org.

“IHIT will not stop pursuing Brandon Teixeira until he is in police custody,” said Superintendent Donna Richardson, Officer-in-Charge of IHIT. We are grateful for our partners from CrimeStoppers and the Bolo Program for providing a significant financial incentive for those with information to finally come forward.”

The Bolo Program and Crime Stoppers are offering a combined financial reward of $55,000 for information leading to the arrest of Brandon Teixeira. To be eligible for the reward, information can be reported to 911, the IHIT information line or anonymously to CrimeStoppers at 1-800-222- TIPS (8477) or www.solvecrime.ca. This reward is available for an initial period of six months.

In the early morning hours of October 23, 2017, shots were fired in the 14300-block of Crescent Road in Surrey. Frontline officers arrived to find 28-year-old Nicholas Khabra with gunshot wounds, who later died in hospital.

IHIT took conduct of the investigation and tirelessly pursued all evidence to bring those responsible for Nicholas’ murder to justice. In less than a year after Nicholas was gunned down, Brandon Teixeira was charged with first degree murder in connection with his death. A warrant was issued for his arrest and it remains active today.

At this point, the investigation shifted from an evidence gathering phase into a pursuit as IHIT and its many partners mobilized to locate and arrest Brandon Teixeira. He has managed to evade police so far but we are working hard to bring that to an immediate end.

I would like to thank our partners from the Bolo Program and the Metro Vancouver Crime Stoppers, which both share IHIT’s concern for public safety. They are offering a combined financial reward of $55,000 for information leading to the arrest of Brandon Teixeira. To be eligible for the reward, you can report your information to 911, IHIT at 1-877-551-4448 or anonymously to Crime Stoppers at 1-800-222-8477. This reward is available for an initial period of six months. So if you have information, we urge you to call in right now.

Please do not take any action to apprehend Teixeira yourself. He is believed to be extremely violent and poses a significant risk to public safety. If you see him, do not approach him but call 911 immediately.

Let me be clear. We are not looking for witnesses or for people to testify in court. This matter is ready to go to trial. We are only looking for Brandon Teixeira so we can hold him to account for his first degree murder charge.

To the friends and associates of Brandon Teixeira, I remind you that helping him to evade lawful custody is a serious criminal offence.

To Brandon Teixeira, there is nowhere to go and we will find you sooner or later. Do the right thing. Contact your lawyer and turn yourself in.