London (IANS/other news sources): Former Chancellor of the Exchequer Rishi Sunak won the first round of balloting in the Conservative party to choose a Prime Minister with 88 votes.

A total of 358 MPs were eligible to vote.

Nadhim Zahawi, who briefly succeeded Sunak as Chancellor before Prime Minister Boris Johnson was forced to resign, and Jeremy Hunt, who was Health Secretary and Foreign Secretary in previous governments, were eliminated as they didn’t cross the threshold of 30 votes to remain in the race.

There is another round of voting on Thursday and the field is expected to be narrowed to two by the end of next week, according to the BBC.

Then around 160,000 Tory members will decide which candidate will be the next party leader and prime minister. The result will be announced on September 5.

Meanwhile, Sunak tweeted the following chart showing how each Tory leadership hopeful would fare against Labour Party Leader Keir Starmer in an election: 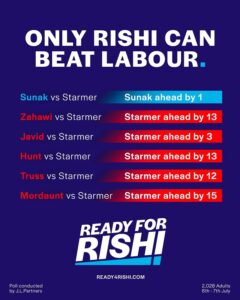