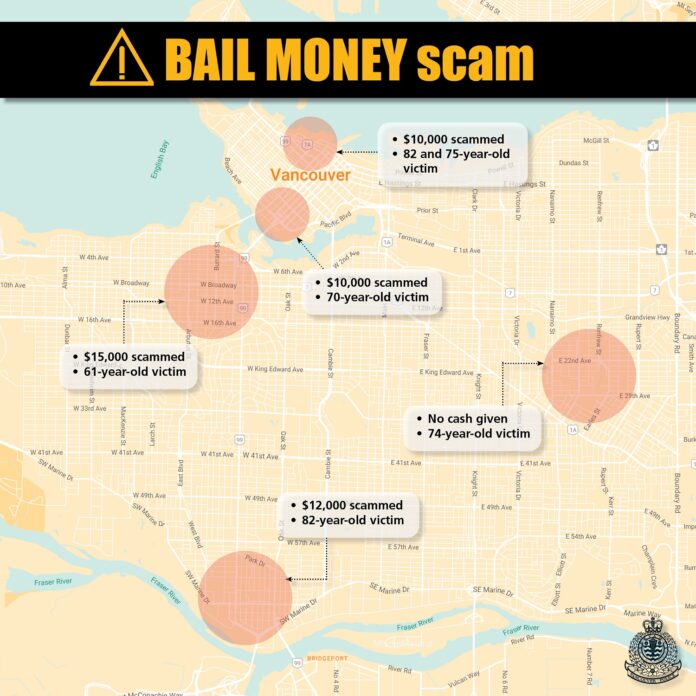 VANCOUVER Police on Thursday renewed warnings to seniors and their families after a familiar scam resurfaced this week.

Fraudsters posing as police officers have scammed tens of thousands of dollars from seniors this week alone by convincing their victims to hand over bail money for a loved one who’s been arrested.

“This is a new variation of a scam VPD first told people about earlier this year,” said Sgt. Steve Addison. “These fraudsters are still finding success by preying on vulnerable people and convincing them a loved one is in jail.”

So far this week, VPD has received five reports from seniors who have either been scammed or have been contacted by the scammers.

* A 74-year-old man from Renfrew Heights received a phone call from a private phone number around 10 a.m. on Tuesday. The caller claimed to be an “officer in charge,” and told the senior he needed to hand over $11,000 bail money for his son, who had been found in a vehicle with drugs. The senior didn’t believe the story and told the scammer he was calling 9-1-1. The scammer hung up.

* A man claiming to be a police officer contacted a 61-year-old Kitsilano woman Tuesday morning and said her nephew was in jail. He convinced her to hand over $15,000 cash for a “gag order.”

* A 70-year-old woman who lives downtown got a call Tuesday morning from someone claiming to be a police officer who needed $10,000 bail money because the victim’s niece had been in a car accident and found in possession of marijuana. The victim met with the scammer and handed over the cash. The scammer called back the next day and asked the woman to hand over $45,000 more. An alert bank teller recognized this was a scam and convinced the victim to call VPD.

* A Kerrisdale woman in her 80s received a call on her cell phone Wednesday morning from two men. One claimed to be the woman’s grandson. The other claimed to be a police officer. The scammers convinced the senior to pay $12,000 to bail her grandson out of jail following a marijuana arrest. She handed the cash over to someone posing as a courier who came to her house.

* A husband and wife in the West End got a call Wednesday afternoon from a man claiming to be a police constable. The scammer provided a fake badge number and told the elderly couple their son had been arrested for impaired driving. The couple provide their home address to the scammer, and handed over $10,000 before realizing they’d been scammed.

“We believe there are a number of scammers who are working together, and likely using social media to mine personal details about their victims,” said Addison. “The scammers often know the names of the victims’ family members, and in one recent case knew that a victim’s relative was on vacation in another country.

“Often the scammers will convince their victims not to talk to others by suggesting there is a gag order in place, or by telling them to use a code word when they’re handing over cash.”

Vancouver Police encourage anyone with information about this scam to come forward immediately.

If it’s a crime in progress or if there is an immediate safety concern, call 9-1-1.