IT was a promise that Surrey Mayor Doug McCallum and his Surrey Safe Coalition ran on in the last municipal election and he stuck to it despite a barrage of slanderous and negative attacks on him by certain vested interests in the City.

And on Thursday, the first rapid transit project south of the Fraser River in 30 years reached a new milestone with the release of the business case and formal approval of provincial funding for the project.

McCallum said: “The City of Surrey is moving full speed ahead on Surrey-Langley SkyTrain early works, having recently launched Phase 2 of roadworks along Fraser Highway to prepare for the extension. I am thrilled to see the business case has received formal approval and that the project will be completed two years earlier than planned. New rapid transit is long overdue in Surrey. At a time when the environment and global warming are at the forefront and gas prices continue to rise, the need to get people out of their vehicles and into transit has never been greater.”

Rob Fleming, Minister of Transportation and Infrastructure, said: “With the release of the business plan and confirmation of provincial funding, we are now one step closer to bringing SkyTrain all the way to Langley. Our business plan confirms this major project will be completed two years earlier than expected, helping to transform the way people live, work and play south of the Fraser.”

The business case estimate for the capital cost of Surrey Langley SkyTrain is $3.94 billion, including $2.4 billion for the Province’s share of the project and $1.3 billion from the federal government, with the remainder coming from local government.

Work on the project is underway, including utility relocations and road widening. With the business case approved and funding in place, the procurement process for major construction will begin this summer. 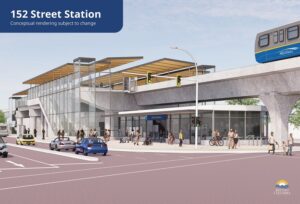 The project will provide high-quality and low-cost transportation for tens of thousands of people throughout Surrey and Langley. The project includes eight new stations and three new bus exchanges, and, once completed, the travel time from Langley City Centre to King George SkyTrain Station in Surrey will be approximately 22 minutes.

The project will provide sustainable transportation choices, as well as opportunities for new market and affordable housing, child care and health-care centres, and other public amenities in Surrey and the Fraser Valley. A focus on transit-oriented development supports complete, connected and affordable communities in areas surrounding the new stations.

To further these opportunities, the Province, TransLink, the City of Surrey, the City of Langley and the Township of Langley have agreed to collaborate on policies and initiatives to increase density and establish targets for transit-oriented development. This includes commitments by local governments to explore and implement more efficient and effective approval processes for developments along the new corridor.

The development of housing and amenities for the Surrey Langley SkyTrain will also be guided by recent changes to the Transportation Act (Bill 16) that were passed during the spring 2022 legislative session. Bill 16 enables the Province to acquire land to build housing and community amenities that are integrated into transit stations or exchanges.

Surrey Langley SkyTrain will be built under a community benefits agreement designed to provide opportunities for locals, Indigenous people, women and other underrepresented groups that are interested in starting or furthering careers in construction.

The provincial contribution of $2.4 billion is based on the commitment to fund 40% of the total cost of the Mayors’ Council’s $6-billion 2022 Investment Plan. B.C.’s investment covers more than 60% of the Surrey Langley SkyTrain project.

Transportation Investment Corporation (TI Corp) is leading the delivery of the Surrey Langley SkyTrain project on behalf of the Ministry of Transportation and Infrastructure. TI Corp will provide the controls, practices and other oversight that are essential for this complex project. 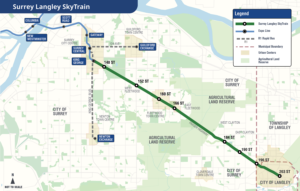 Approval of the business case and provincial funding for the Surrey Langley SkyTrain project will allow the Province to begin the process of securing contracts for major works.

Surrey Langley SkyTrain will be delivered through three different sub-contracts. This approach will increase bid competition and enable more local companies to bid on different elements of the project.

The first contract will be for the SkyTrain guideway (substructure and superstructure), including active transportation elements. Procurement will begin with a request for qualifications in August 2022.

The second contract will be for stations construction, including active transportation elements, such as cycling and walking paths, that will integrate into the project. Procurement for this contract is expected to begin in the fall.

The third contract will be for the electrical systems, including integration and the actual SkyTrain trackwork. Procurement for this contract is expected to begin as early as December 2022.

Major construction is expected to begin in 2024, with the Surrey Langley SkyTrain in operation in late 2028.

The business case estimate for the total cost of Surrey Langley SkyTrain is $4.01 billion, which includes $3.94 billion in capital cost, $11 million for planning and $60 million in active transportation investments along or near the Fraser Highway.

Find out about job opportunities for the project: https://bcib.ca/