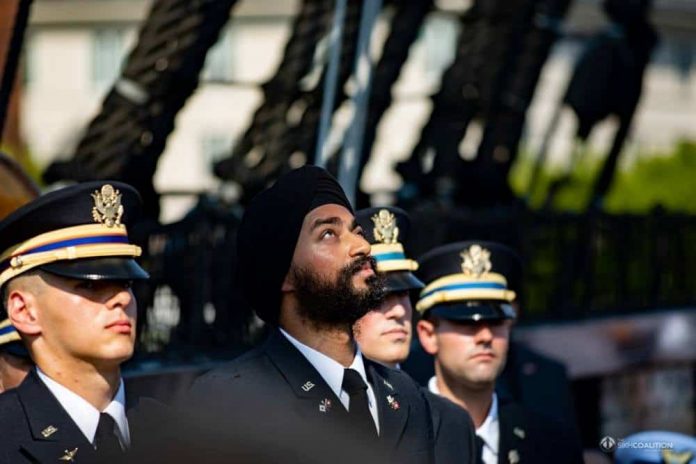 BOSTON, MA: On August 5, Second Lieutenant Kanwar Singh graduated from Army Candidate School as part of the Massachusetts Army National Guard. He will now be responsible for leading soldiers during humanitarian, homeland security and combat operations as a Signal Corps officer.

This graduation marks another touchstone moment in the progress of Sikhs breaking employment discrimination barriers in the U.S. military. Kanwar Singh’s graduation also marks a personal four-year journey that originally started with him being denied the right to fully serve while maintaining his religious of articles of faith.

“We have come a long way together in our fight to end religious discrimination by our nation’s largest employer,” said Kanwar Singh. “I am forever grateful to the Sikh Coalition for their tireless work to break down these employment discrimination barriers on behalf of Sikhs pursuing their professional dreams across the United States.”

After an eight-year campaign spearheaded by the Sikh Coalition to end the U.S. military’s presumptive ban on the service of observant Sikhs, the U.S. Army put forward new rules in January 2017 that significantly improved the standards for Sikhs and other religious minorities to serve in the nation’s military. Kanwar Singh was granted his permanent religious accommodation immediately after the policy change and has been serving without incident ever since.

“The choice to serve in the U.S. military is an entirely personal one, but it is a choice that everyone in the United States should have regardless of their religion, race, gender or sexual orientation,” said Sikh Coalition Staff Attorney Giselle Klapper.

Following in the footsteps of African Americans, women’s rights, and LGBT communities, the Sikh Coalition continues to systematically remove barriers that prevent Sikhs who wish to serve with their articles of faith intact. Their military campaign has been endorsed by 27 retired generals and over 100 bipartisan members of the U.S. Congress. In 2016 a federal court agreed with their position when they filed a lawsuit against the U.S. Army in partnership with the Becket Fund for Religious Liberty and the law firm of McDermott Will & Emery.