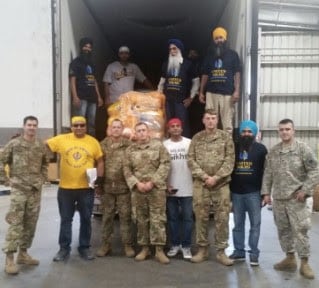 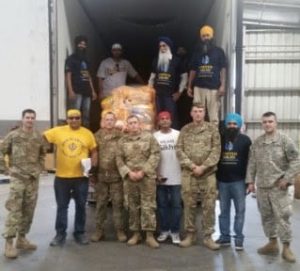 AS the waters recede, Texas residents are returning to flooded homes, contaminated water and countless stories of unimaginable loss. But amid reports of heartache and destruction, powerful illustrations of solidarity and kindness have emerged. United Sikhs volunteers have teamed up with local communities to showcase the power of humanity.

So far, with the help of generous donations, volunteers have donated 20 truckloads of sheet rock, nails and other cleaning materials to the League City Police Department in League City, Texas. These materials will be used to repair and rebuild their homes.

Trucks of supplies came from as far away as Sacramento, California, (a 30-hour drive), and volunteers came from as far as Washington to help rebuild the homes of first responders. There was an especially large outpouring of support from the Seattle community which not only helped collect and distribute boxes of requested goods (video) but also raised nearly $20,000 for victims over the weekend. With those donations they were able to procure the building supplies once on the ground in Houston. In Kountze, Texas volunteers worked alongside US troops to provide aid and assistance to flood victims. 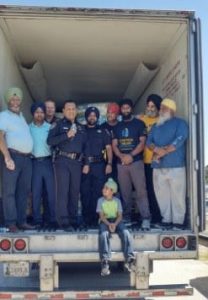 “We’d like to send a special thanks to Gurdwara Singh Sabha Renton, Sacha Marg Auburn, Sikh Center of Bothell and Gurdwara Marisville,” Jatinder Singh, National Director for United Sikhs Aid said. “Also to all volunteers, especially Amandeep Singh and Paul Singh who came all the way from Seattle to lead in the delivery to the Harris County Sheriff’s Office, we are grateful for your service.”

Harvey has undoubtedly been the worst Texas storm in more than half a century, but it has brought out the best in many communities – near and far. Volunteers (many of whom have families and full time jobs) took time off from their busy lives to help complete strangers, said United Sikhs organization.

They adopted neighborhoods, providing emergency assistance and supplies. They joined forces with companies like Lowe’s, Costco and Taylor Rental to help package and distribute goods. They donated a truckload of goods to CFISD’s Moore Elementary School (VIDEO). They served langar (hot meals) to more than 2,500 people in just one weekend. They’ve provided boxes of clothing, water, personal hygiene kits, food and other goods to storm victims. A prime example is Maninder “Sunny” Singh. He lost his transportation business because of his vehicles getting overcome by flooding but he has remarkably turned to helping others despite his ordeal. Him and many others are putting in nearly 18 hour days to help out. They say it’s a “labor of love.”

“We know it’s going to be a long road to recovery, as many as 450,000 people still do not have safe drinking water. It’s a work in progress but we believe we are called to a duty of compassion and responsibility to help our fellow brothers and sisters in their time of need,” one volunteer, based at the Sikh National Center, said.

If you want to support a family and donate to United Sikhs efforts, donors in the US can text HOUSTON2017 to 91999 to donate via mobile or make an online donation at https://app.mobilecause.com/f/1hkr/n. Donors outside United States can donate here.