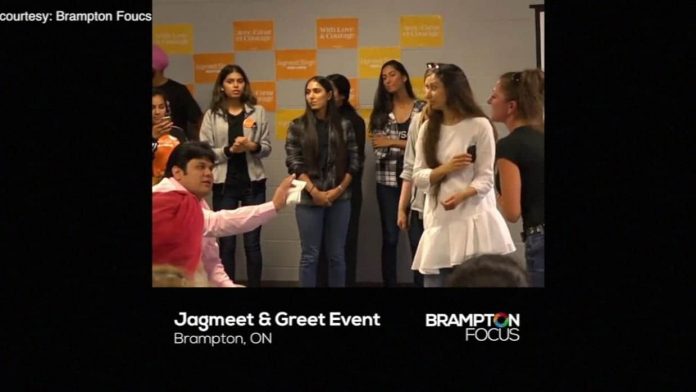 AT  a meet and greet last week in Brampton, Ontario, federal NDP leadership hopeful Jagmeet Singh truly proved that he has what it takes to be Prime Minister of Canada.

The dignified and calm way in which he handled a white racist heckler has won the hearts of millions of Canadians.

If the heckler and her supporters thought they would unnerve Jagmeet and somehow sabotage his highly successful campaign as he has garnered support from major unions and fellow NDP bigwigs, she was sadly mistaken. Her disgusting behaviour has indeed backfired.

But first let us hear what transpired that day in Jagmeet’s own words:

AS part of my campaign to become leader of one of Canada’s largest political parties, I held an event in the city where my political career began.

I walked into a room filled with supporters and old friends. As soon as I was introduced, a person confronted me with angry, hateful, and Islamophobic comments. I had to act fast and set the tone for the room.

Despite this person’s anger and hate, I told them that we loved them, respected them, and would protect their rights.

I chose not to answer the questions asked because I didn’t accept the premise. Many people have commented that I could have just said I’m not Muslim. In fact, many have clarified that I’m actually Sikh. While I’m proud of whom I am, I purposely didn’t go down that road because it suggests their hate would be ok if I was Muslim. We all know it’s not. I didn’t answer the question because my response to Islamophobia has never been “I’m not Muslim.” It has always been and will be that “hate is wrong.”

Once allowed to grow, hate doesn’t pick and choose, it spreads like fire. Once we say it’s ok to hate someone based on their religion, we’re also opening the door to hate based on race, gender, sexuality, and more.

It’s important that we stand united against all forms of hate.

It takes love to understand that we’re all in this together. It takes courage to come together, demand better and dream bigger, so that we can build a world where no one is left behind.

With love and courage,
Jagmeet Singh

AS I have pointed out in the past, there will always be a segment of the white population in Canada that will spew out their vicious racist venom at every opportunity. About 30 per cent of Canadians fall in this category – they will NEVER get over the fact that Canada is multicultural and there will NEVER be a white Canada! These are the ones who vote for the Conservative Party.

So, yes, we will continue to witness such disgraceful behaviour by some racist individuals.

But, no, they don’t stand a snowball’s chance in hell if they think they can intimidate decent Canadians.