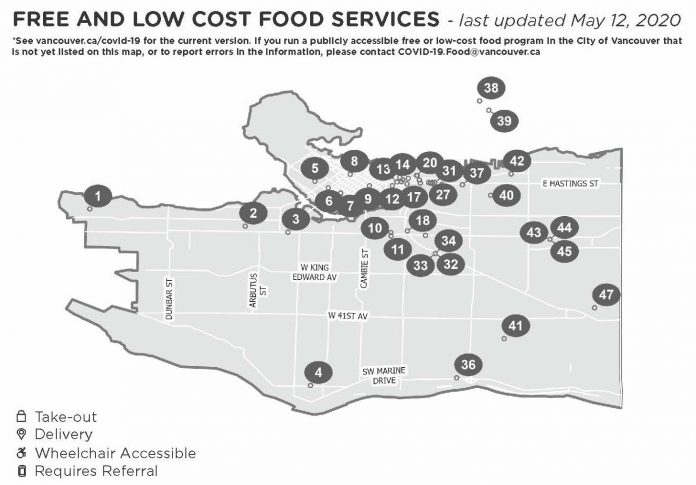 DURING COVID-19, communities, charities and businesses are coming together like never before to support residents in need to access free and low cost food.

Layoffs, underemployment, long queues at grocery stores and isolation requirements have made it more difficult for many people to put food on the table but dozens of organizations have stepped up to meet this need.

A new map, collated by the City of Vancouver, has been launched illustrating a broad web of more than 50 resources that residents who need free or low cost food can access. The map was originally the brainchild of Steph Limage from Limage Media. In the early stages of the pandemic, Limage leveraged her community connections and knowledge of grassroots food security responses in the Downtown Eastside to quickly respond to the need for up-to-date information about food program status in that neighbourhood.

The map released by the City on Wednesday builds upon Limage Media’s map and a pre-COVID food asset map collated by Vancouver Coastal Health to provide up-to-date information about low cost food programs currently available city-wide. This map, which will be updated regularly, is currently available in PDF format in English, and will soon be available in Chinese, Punjabi, Tagalog and Vietnamese, and in an interactive, web-based format.

Speaking about the food response across Vancouver, Sadhu Johnston, City Manager, said: “For many years, non-profit organizations, faith based groups and other community networks have played a critical role in food access for residents. We are extremely humbled by the way that these groups have quickly pivoted their programming to adjust to the increased demand and increased safety protocols that have been created by this pandemic.

“As highlighted by the map we’ve published today, groups across the city are collaborating and finding innovative solutions to ensure that their neighbours do not have to go without and we are proud to support them with this work.”

Many funding organizations have been critical in the food response. The United Way of the Lower Mainland has seen a significant increase in need for food support over the last two months, with 92 per cent of their community partners identifying food security as a top issue. In response to this demand, United Way distributed 46,000 grocery hampers and meals via their Local Love Food Hubs across the lower mainland in the week of April 24-30.

Speaking about the impact of the Local Love Food Hub hampers, Jennifer Gray-Grant, Executive Director at Collingwood Neighbourhood House, said: “There’s a 73-year-old woman who is going through cancer treatment and taking care of her two grandchildren. We were able to provide nutritious meals for her and her grandchildren, meals like chicken and rice and fresh veggies, and also help with ongoing basic groceries, thanks to this support. As much as the food itself helps, having the people that use our services know that someone cares about them means so much to them.”

Many food providers have expanded existing programs to provide additional services to people impacted by COVID-19. The Muslim Care Centre (MCC), who have been feeding 100-250 per day since last summer, have increased their daily food program in the Downtown Eastside and during Ramadan they are also delivering more than 350 meals to Muslims living across the lower mainland including newly landed immigrants, refugees and people living in shelters.

“As Muslims we want Vancouver to know our faith’s fundamental teachings are to share your wealth, be kind, feed the hungry, and spread peace. That’s how we’ve been able to establish and sustain MCC strictly based on donations and volunteers. All our programs are for anyone in need. We provide a non-judgmental, and compassionate approach to ignite a positive change in the DTES,” says Sharina Khan, the lead coordinator at MCC.

Hundreds of other funders, food providers and delivery providers have also stepped up to help at this time, including:

* Aboriginal Mother’s Centre – The Centre has redistributed meals that have been donated and provided hot lunches daily for 200 people on the streets, families, and children as a way to meet basic food needs and provide touchpoints for connection and support.
* Hua Foundation – The Foundation partnered with Yarrow Intergenerational Society, Bao Bei Brasserie and Vancity to deliver groceries, sourced from Chinatown businesses and local producers, to Chinese seniors.

* Guru Nanak – Prior to the COVID-19 outbreak, Guru Nanaak was serving more than 1,000 meals per week in the DTES. Abiding by the COVID-19 guidelines and prioritizing safety, they are now offering take-out meals in collaboration with the DTES neighbourhood house and Carnegie Community Action Project.
* Grandview Woodland Food Connection – Following the outbreak of COVID-19, the group shifted their food programs in order to do emergency food delivery and to date they have provided almost 500 nutritious food boxes to community members who are in isolation and experiencing hardship.

* Khalsa Diwan Society – As well as donating PPE to local hospitals, the Sikh community at KDS has been serving hundreds of free takeaway meals three nights a week at the Ross Street temple.

These are only a few examples of the hundreds of community-led responses to address food insecurity in the community. The City of Vancouver said it is sincerely grateful at the rapid response of so many non-profits, social enterprises, faith-based groups, companies, informal networks, and individuals who are helping their neighbours and community members.

If you run a publicly accessible free or low-cost food program in the City of Vancouver that is not yet listed on this map, get in touch with the City to have your program added.

To find out more about the City’s food response during COVID-19, visit Vancouver.ca/covid19.