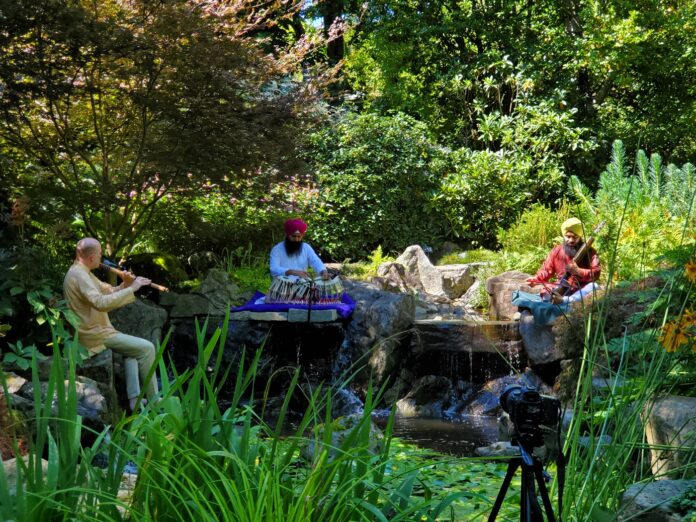 the Digital Stage Page, or the City of Surrey YouTube Channel

ON September 18, join accomplished musicians, Amarjeet Singh, Baljit Singh, and Bruce Harding for The Naad Malhaar Concert, a show that is the perfect marriage of setting and song. Filmed in Surrey’s picturesque Darts Hill Garden Park, this talented trio will delight audiences with the enchanting and soothing sounds of the tabla, flute, and dilruba. The show was filmed for Surrey Civic Theatres’ Digital Stage, a recent initiative to support local and Canadian artists, that audiences can enjoy from the comfort and safety of their own homes.
The group, Indian Standard Time have been together for several years, although it was a serendipitous meeting between Bruce Harding and Amarjeet Singh that helped form the group into the creative musical collective they are today. Harding said, “I started working with Amarjeet, our tabla player, 17 years ago, we when we worked on a recording project together, and we just hit it off, so we started playing together and gradually over time, we added other musicians to the group and the core group have been playing together eight or nine years.”

Harding also said that the group enjoy a marvellous synergy where everyone adds something to the mix, be it western or South Asian influences, and that together, the resulting fusion is musical magic, “Right from the beginning, there was that amazing spark of creativity. We inspire each other, we could sit and write endlessly, and most importantly, we have fun together. We’ve all been involved in other projects where personality is an issue and someone is a diva, so it’s great that we all get along with each other so well, it’s really quite delightful.”

Harding hopes that this performance that was filmed in August will be something everyone can tune into and enjoy, “It will be a show rooted in the North Indian tradition. Everything is rag* based, in that melodic Indian tradition, although it’s not heavy music, most of it is quite light and sweet, so it’s more like folk or pop. Because we are playing beside the water feature, our signature rag is one for the rainy season, which will make a nice bridge with the real water babbling as we unfold sweet melodies for people.”

Harding also said the performance will be a good introduction to South Asian musical tradition. “Traditionally in North Indian music, one piece can go on for 75 minutes, whereas our versions will be more like eight to ten minutes, so it’s more condensed and more accessible, so I think it will appeal to just about anyone. For a South Asian audience, they would recognize the rags that we’re playing, and everyone is starved for live music at this time, so this is a good cross-cultural opportunity to hear what Surrey creates.”