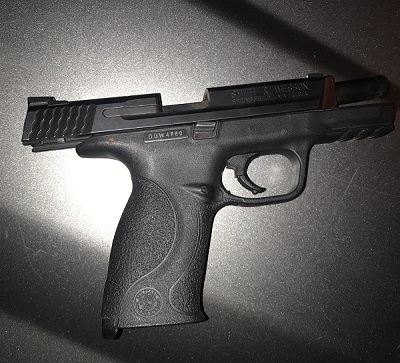 A traffic stop involving individuals connected to the Lower Mainland Gang Conflict has resulted in the seizure of a handgun.

On November 8, at approximately 12:30 a.m., during proactive enforcement, a Surrey RCMP Gang Enforcement Team (SGET) officer stopped a 2012 Mercedes near the intersection of 62nd Avenue and 132nd Street. As the investigation progressed, the officer noted signs of alcohol consumption and launched an impaired driving investigation. The driver was arrested for refusing to comply with a breath demand.

Further investigation led to the seizure of a stolen handgun. Both the driver and passenger were subsequently arrested for possession of a restricted firearm and careless use of a firearm.

The driver was issued an immediate roadside prohibition, a violation ticket for drive contrary to restrictions, and the vehicle was impounded. Both the driver and passenger were released without charges associated to the firearm, pending further investigation. The two men are known to police and believed to have ties to the Lower Mainland Gang Conflict.

“The behaviours of the individuals involved in this traffic stop put the public at risk in many ways,” said Staff-Sgt. Ryan Element, Acting Proactive Enforcement Officer. “The work that Surrey Gang Enforcement Team is doing is having a positive impact on public safety by literally taking dangerous weapons out of the hands of criminals.”