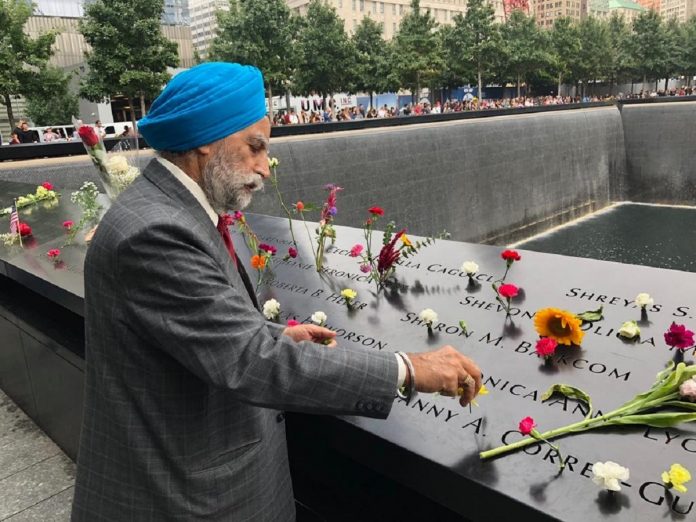 NEW YORK: On the 18th anniversary of the September 11, 2001 terrorist attacks, the United Sikhs organization released a timeline detailing dozens of suspected hate crimes and documented targeted assaults on the Sikh community across the United States.

“As we remember and mourn the lives of those lost during the tragic 9/11 attacks, we are also reminded of the growing civil rights and safety concerns of Sikh Americans,” said Jagdeep Singh, United Sikhs CEO. “Since 9/11, we have noticed a marked increase in hate crimes, discrimination and bullying affecting the Sikh community. In light of those we have lost, and those who remain affected, we call upon the Congress and the White House to enact stronger provisions against hateful rhetoric and oppressive acts of violence against religious minorities stemming from 2001.”

As the United Sikhs’ legal team actively pursues justice for the latest victim of a suspected hate crime in Northern California, Parmjit Singh, the organization on Wednesday released a timeline of more than 40 attacks against the community dating back to September 11, 2001.

“Sikhs continue to be a target of hate crimes and several have been murdered with no justice to date, as many attackers remain on the loose,” said Jesse Singh, the United Sikhs’` Legal Director. “We are calling upon our officials in Washington to take this alarming trend of incidents seriously and enact clearer pathways for hate crime charges and classifications and work with us to raise further awareness of the persecution of minorities in the U.S.”

Official statistics documenting hate crimes and bias-based offences against Sikhs are unreliable in part because reporting attacks is not mandatory. Many victims do not report such incidents, which range across a spectrum from hateful or xenophobic comments to violent physical assault and everything in between.

Such incidents are frequently classified by the Federal Bureau of Investigation (FBI) and law enforcement authorities, if they go reported at all, as “anti-Muslim” rather than anti-Sikh. A general unfamiliarity with Sikhi among law enforcement figures, particularly at the local level, also contributes to incidents going unreported.

The FBI, for its part, only began tracking explicitly anti-Sikh hate crimes in 2015. As a result, the true extent of anti-Sikh discrimination and violence is difficult to know. Nevertheless, a public record exists of the most high-profile attacks. What follows offers a summary of documentation on all such reported incidents since 9/11/2001:

Nov. 18, 2001 — Palermo, NY: Three teens burn down Gurdwara Gobind Sadan because they thought it was named for Osama bin Laden.

Dec. 12, 2001 — Los Angeles, CA: Surinder Singh Sidhi, a shop owner, is beaten in his store by two men who accuse him of being Osama bin Laden.

May 20, 2003 — Phoenix, AZ: Sikh immigrant and truck driver Avtar Singh is shot while waiting for his son to pick him up. As he is being shot, he hears someone say: “Go back to where you belong.”

Aug. 5, 2003 — Queens, NY: Members of a Sikh family are beaten outside of their home by drunk individuals yelling, “Go back to your country, Bin Laden.”

May 30, 2007 — Joliet, IL: a decorated U.S. Navy veteran of the Gulf War, Kuldip Singh Nag is approached by a police officer outside of his home, who reportedly assaults Nag with pepper spray while hurling expletive-laced, anti-immigrant statements.

Jan. 14, 2008 — New Hyde Park, NY: a 63-year-old Sikh, Baljeet Singh, has his jaw and nose broken when attacked outside his temple by a man who lived next-door.

Feb. 28, 2008 — Bryan, TX: a Sikh man is assaulted in a WalMart parking lot. The assailant called him a terrorist, punched him in the face and head and knocked his turban off.

June 5, 2008 — Albuquerque, NM: a vehicle belonging to a Sikh family is defaced with the message “F*** Allah!” and a picture of male genitalia.

Aug. 4, 2008 — Phoenix, AZ: Inderjit Singh Jassal is shot and killed while working at a 7-Eleven. No clear motive is ever found for the crime.

Oct. 29, 2008 — Carteret, NJ: a Sikh man, Ajit Singh Chima, walks in his neighborhood and is attacked by a man who casually leaves the scene afterward. Nothing was stolen.

March 6, 2011 — Elk Grove, CA: Two elderly Sikh men in traditional clothing are shot and killed. The perpetrator is not found.

May 30, 2011 — New York, NY: Jiwan Singh, the father of Jasmir Singh, who was assaulted in early 2009 in Queens, is attacked and accused of being related to Osama bin Laden.

Aug. 5, 2012 — Oak Creek, WI: a white supremacist gunman is shot dead by police after he opens fire in a gurudwara during Sikh prayer services, killing six.

May 5, 2013 — Fresno, CA: 82 year-old Piara Singh is assaulted outside his gurdwara and subsequently hospitalized.

July 29, 2013 — Riverside, CA: a gurdwara is vandalized overnight and spray-painted with the word “terrorist.”

July 30, 2014 — Queens, NY: Sandeep Singh, 29, is accosted by a man in a pick-up truck as he crosses the street. Singh is called a terrorist and the assailant runs him over and flees the scene.

Sept. 8, 2015 — Darien, IL: Inderjit Singh Mukker is assaulted in his car by an attacker who called him “Bin Laden,” and told him to “go back to his country.”

Dec. 5, 2015 — Buena Park, CA: a gurdwara and a member’s truck parked in the parking lot, were reportedly vandalized with graffiti, including “F—ISIS and Islam.”

Dec. 9, 2015 — New York, NY: A man posts an online video of Darshan Singh while sleeping on a flight from New York to California with a title ‘Would You Feel Safe’ and a description that says “flying with bin laden.”

Dec. 26, 2015 — Fresno, CA: Amrik Singh Bal, 68, was waiting alone for a ride to work when two white men stop their car in front of him and started yelling obscenities at him and beat him while yelling “Why are you here?”

Jan. 1, 2016 — Fresno, CA: 68-year-old Gurcharan Singh Gill, an employee at a local liquor store was at work when he was stabbed to death during broad daylight.

Aug. 21, 2016 — Washington D.C.: Mehtab Singh Bakhshi is standing, talking with friends near Dupont Circle when Dylan Millhausen, a U.S. Air Force Officer, pulls off his turban and punches him in the face until he was unconscious.

Sept. 25, 2016 — Richmond, CA: Five white men pull up to a stoplight in a Ford F-150 pickup truck next to Maan Singh Khalsa, who was driving a car in the next lane over. They hurl a beer can at Khalsa, then get out of the truck to punch him through his car window and cut his hair off with a knife. His hand is severely stabbed, requiring a finger amputation.

March. 3, 2017 — Kent, WA: Deep Rai is shot and critically injured by assailants while working on his car in front of his home.

March 26, 2017 — Gresham, OR: a Sikh woman is subjected to attempted sexual assault in a gurdwara by a drunk man.

April 16, 2017 — New York, NY: Harkirat Singh experiences an attack while driving a taxi in which a passenger forcibly pulled the turban from his head.

Sept. 4, 2017 — Los Angeles, CA: a gurdwara is vandalized with hate messages scrawled on its walls, including one calling for ‘nuking’ Sikhs. When confronted by a man who caught the vandal on cell phone video, he threatens to slit his throat.

Jan. 28, 2018 — Moline, IL: Gurjeet Singh is threatened by an irate Über passenger who points a gun at his head, shouting “I hate turban people.”

July 31, 2018 — Keyes, CA: Surjit Malhi, age 50, is violently assaulted while placing political signs in his community. His truck is vandalized with white supremacist markings and the words “Go Back to Ur Country.”

Aug. 6, 2018 — Manteca, CA: 71-year-old Sahib Singh Natt is enjoying his morning walk when he is brutally attacked by two teens, one of whom is the son of a local police chief. In a video captured by a nearby surveillance camera, the teens are seen kicking and spitting on Natt while on the ground.

July 25, 2019 — Modesto, CA: an intruder at the Sikh Temple Modesto Ceres broke windows at the home of a priest, Amarjit Singh, on temple grounds, punched him and shouted obscenities and told him to go back to his own country before fleeing.

Aug. 25, 2019 — Tracy, CA: Parmjit Singh, age 64, was killed during a nighttime walk at a Northern California park. A 21-year-old white male suspect has been apprehended and charged with his murder. UNITED SIKHS is legally representing Parmjit’s adult children and are actively working with the FBI and local police to push for hate crime charges. The suspect’s arraignment is tentatively scheduled for Oct. 16.