Home Breaking News What impact did Ethics Commissioner’s report have on political landscape? Not much...
Facebook
Twitter
WhatsApp
Email 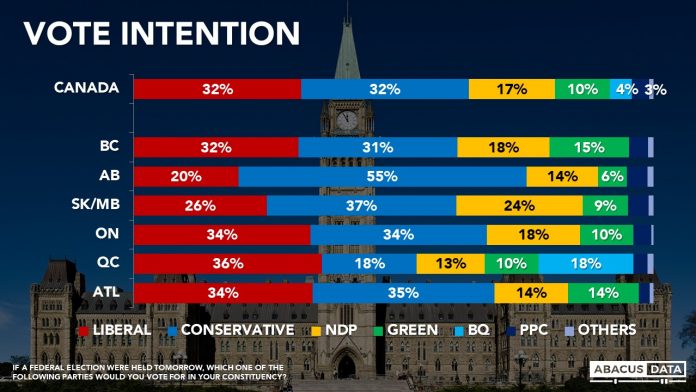 WE were in the field immediately after the release of the Ethics Commissioners report on the SNC Lavalin matter, and through the following several days.

Here’s what our national survey of 2,152 respondents reveals:

SNC – LAVALIN: FEW MINDS CHANGED. MORE OF THOSE WHO DID SEE A STORY OF PM PROTECTING JOBS.

Just over a third (35%) had not heard of the Ethics Commissioners’ report, while 48% said they had heard something about it.  Only 16% consumed a lot of news coverage on this topic.  Those with the strongest desire for a change in government or the strongest desire to see the Liberals re-elected were paying the most attention.

Of those who followed the story of the Commissioners Report at all, 78% said it did not change their opinion of what happened, while 22% said it did.

Among all who followed the story, 43% say the SNC Lavalin matter seems to be about “a Prime Minister looking for ways to keep workers from losing jobs” while 57% say it is about “doing something inappropriate for a company that did not deserve help.”

However, what is perhaps most noteworthy in the results is this:  among the 21% (equivalent to about 6 million voters) who said the Ethics Commissioner’s report altered their view of what happened, more (56%) came away thinking it was about protecting jobs than became convinced that the Prime Minister had done something inappropriate (44%).  This effect was most notable among NDP and Bloc Quebecois voters.

Another way to look at the potential impact of the Ethics Commissioner’s report is to merge the three questions: 36% are unaware of the report, and another 50% are aware of the report, but it confirmed what they already thought about the issue. That represents 86% of the population.

Based on this, we can conclude that the net impact of the report so far was marginal.

Among the 8% who said their minds were changed because of the report and felt the Prime Minister was trying to save jobs, 73% would consider voting Liberal, and 54% of those decided would vote Liberal today.

Among the 6% who said their minds were changed because of the report and felt the issue was more about Prime Minister doing something inappropriate, 42% are still open to voting Liberal, with 22% planning to do so if an election was today. 35% would vote Conservative, 23% NDP, and 12% Green.

And so given this, what impact has the report had on other indicators? Not much.

LIBERALS AND CONSERVATIVES REMAIN DEADLOCKED AT 32%

If an election were held at the time of the survey, the Liberals and Conservatives would each get 32% of committed voter support, followed by the NDP at 17%, the Greens at 10%, and the BQ at 4%. All these numbers are virtually unchanged since our last survey completed in early August.

Regionally, the Conservatives are well ahead in Alberta and lead in Saskatchewan. The Liberals lead by a wide margin in Quebec while the two parties are tied in British Columbia, Ontario, and Atlantic Canada. The change in the regional numbers from our last survey is within the margin of error.

36% approve of the job the federal government is doing, compared to 47% who disapprove.  These numbers are virtually unchanged since early in the month. Approval of the government remains 4 points higher than at its floor in April and consistent over the past three months.

The accessible voter pool for the Liberals (50%) and the Conservatives (48%) is unchanged from the previous wave. The same is true for the NDP and Green Party.

Preferred Prime Minister results showed a slight narrowing of the 6-point lead Justin Trudeau had. In this wave, 33% picked the Liberal leader, compared to 31% who preferred Andrew Scheer. Elizabeth May and Jagmeet Singh continue to be neck and neck for third.

According to Bruce Anderson: “The SNC Lavalin issue definitely caused harm to the public opinion surrounding the PM and the Liberal government in the spring, but the Ethics Commissioner’s report did not trigger a new wave of unhappiness with Trudeau or the government.  Most paid little attention, and said their minds were unchanged.

“Trudeau’s unwillingness to apologize for trying to protect jobs appeared relatively well heard and accepted, especially by those whose minds were open to change. With that segment of the population, the Liberals actually appear to have had a better week than their opponents, on this issue.“

According to David Coletto: “The evidence from our survey indicates that the Ethics Commissioner’s report has not had much impact on Canadian public opinion overall. Vote intention, government approval, and the Prime Minister’s personal image are unchanged from the survey we conducted earlier this month.

“It seems that views on the matter are polarized and to an extent baked into their wider views. The damage caused by the SNC-Lavalin controversy persists in that more people continue to view the Prime Minister negatively than positively, more disapprove of the government’s performance than approve, and the Liberal vote share is 4 to 5 points lower than it was in the final months of 2018. But there’s no evidence these indicators are substantially different than only a few weeks earlier.

“If anything, the Commissioner’s report may have stalled some positive momentum the Liberals and Trudeau were likely experiencing over the previous few months, but it hasn’t fundamentally changed the nature of the election. The race is very close and still quite unpredictable at this stage.”

Our survey was conducted online with 2,152 Canadians aged 18 and over from August 14 to 19, 2019. A random sample of panellists was invited to complete the survey from a set of partner panels based on the Lucid exchange platform. These partners are double opt-in survey panels, blended to manage out potential skews in the data from a single source.

The margin of error for a comparable probability-based random sample of the same size is +/- 2.2%, 19 times out of 20.  The data were weighted according to census data to ensure that the sample matched Canada’s population according to age, gender, educational attainment, and region. Totals may not add up to 100 due to rounding.