METRO Vancouver Transit Police are asking for the public’s assistance in identifying a suspect who allegedly assaulted a woman on board a TransLink bus.
On Monday, June 20, around 7:30 p.m., a woman was seated on a bus travelling northbound on Main Street in Vancouver, when a man, not known to her, boarded the bus at Marine Drive and sat several seats away.
Shortly after the bus departed, the man stood up and aggressively approached the woman. He stood inches from her face, allegedly shaking his fist in the air and threatening to punch her. The victim approached the bus operator to make him aware of the situation while the suspect paced back and forth.

As soon as the bus stopped, the suspect approached the victim as she was speaking with the bus operator. Then, without provocation, allegedly punched her in the head and face several times, causing her to fall to the ground. He was last seen exiting the bus at Main Street and 64 Avenue.
The suspect is described as a black male, 30-50 years of age, 6 feet tall, slim build and short black hair. He was seen wearing a light brown pullover, dark coloured pants and black runners. 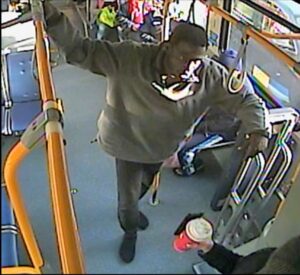 “Fortunately, the victim did not sustain any serious physical injuries in this shocking, unprovoked attack. Everyone has the right to arrive at their transit destination safely, and without the fear of harassment or assault. We are reaching out to the public with the hope that someone recognizes this suspect,” said Constable Amanda Steed.
Anyone with any information about this assault or any other incident on transit is asked to contact Transit Police by phone at 604-515-8300 or by text at 87.77.77. Always call 9-1-1 in an emergency.

Suspect arrested in a series of stranger assaults on Transit