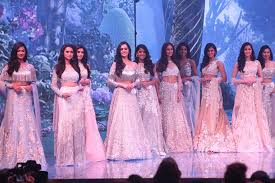 Mumbai (PTI): Haryana girl Manushi Chhillar was crowned this year’s Femina Miss India World 2017 and the title winner now has her eyes set on winning the international pageant Miss World, to be held later this year.

The medical student, who sacrificed one whole year of her education to participate in the national competition, said she grew up idolising Reita Faria, the first Indian and Asian to win the Miss World crown in 1966.

“My idol has always been Reita Faria. I have always admired her as a kid. She was the first Indian and Asian ever to win the title.

“The best part was that the moment she completed her reign as Miss World, she immediately went back to what she was passionate about – being a doctor – even though she had many opportunities in the glamour world. I feel she was a genuine person,” Chhillar told PTI in an interview.

The grand finale of the Femina Miss India 2017 was held here on Sunday and was hosted by Karan Johar and Riteish Deshmukh.

Chhillar said she was very focused on winning Miss India and worked very hard during the run-up to the competition, which included daily workouts, practising questions, doing a grooming course and also working on her personal style.

“I was always passionate about the Miss India pageant.

Though I was a medical student, I never had a plan B. I don’t want to regret anything in life, so it was really important for me to win this competition. My aim has always been to win the Miss World title.”

Former pageant winners like Sushmita Sen, Aishwarya Rai and Priyanka Chopra have carved a career in Bollywood post their wins.

When asked if she had similar plans and considered the Miss India title as the stepping stone to Bollywood, Chhillar said, “I disagree with the notion. I feel that Miss India is a stepping stone for anything you want to do, not just Bollywood.”