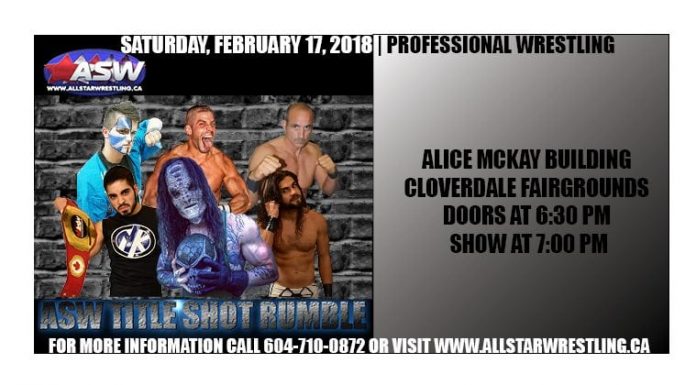 Ladies and gentleman its time once again for some hard hitting, high flying entertainment that will leave you on the edge of your seat.  All Star Wrestling is proud to welcome you to the Alice McKay building which has been home to All Star Wrestling for many years.  In the heart of the Cloverdale Fairgrounds in Surrey British Columbia you will be sure to find great parking at no cost to you and will also be just steps away from the action in side.  So ladies and gentleman we hope to see you Saturday February 17th featuring The Luchasaurus!

BREAKING news
ASW Tag Team Titles will on the line!
The Professional Nick Price & Hurricane Adam Ryder(Champions) vs Thunder From Jalandhar & the LuchaSaurus from Lucha Underground!!

While the current ASW Tag Team Champions have went toe to toe with the very best in the Pacific northwest and defeated them all with relative ease this next title defence will push them to the limits.  Current ASW Trans Canada Heavyweight Champion Thunder From Jalandhar will be teaming with International star from Lucha Underground LuchaSaurus.  Although Thunder and LuchaSaurus have never teamed up before, Nick Price and Adam Ryder have demanded to know why this match up was made.  Commisioner Marsh had a explanation and posted a video on line.  These two teams will do battle and you the fans are in for the ride of your lives!!

All Star Wrestling presents the ASW TITLE SHOT RUMBLE! The winner will receive a title shot of his or her choosing March 2nd. This will feature the stars of the Pacific Northwest Wrestling.

Two men start and then every ONE MINUTE another contestant enters….

More to be announced!

Match #3 Tied 1 to 1
SPIN the WHEEL(Stipulation of match to be decided by the spin of a roulette wheel)
Matt Xstatic vs Shreddz
Both of these warriors have traded victories against each other but neither seems to be happy!

ASW commissioner has decided to make these two have a best of seven series.

Last show seen Bambi turn on her own sister and mother with a vicious attack in the ring. This left both her mom, Raven Lake and her sister, Liiza Hall laid out. She used the Most Popular Wrestler in ASW award, voted by the fans to do the damage. A new female referee, Gearl Hebner has been apponinted by ASW to keep law and order in this match up.

Tickets are available at www.vtixonline.com

Meet and Greet the wrestlers after the show at Cocktails and Dreams!