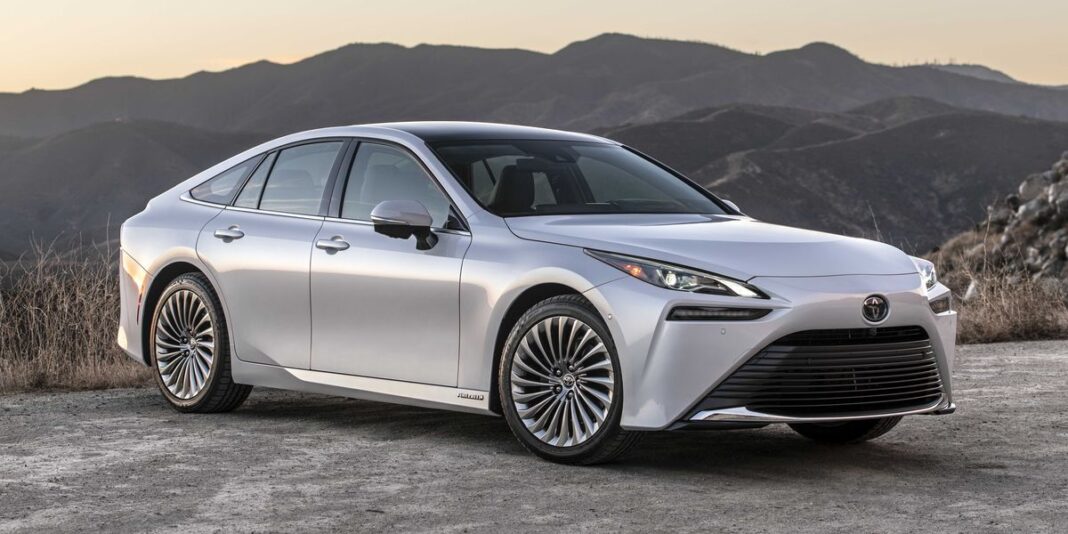 You may not be too familiar with The Toyota Mirai, its not a gasoline, hybrid or fully electric (EV) vehicle, but the latest version of Toyotas hydrogen fuel-cell powered four door sedan. It is what termed as a   FCEV (Fuel Cell Electric Vehicle)   powered by a hydrogen fuel cell energy storage system. How it works  is basically – the fuel cell technology combines hydrogen from a storage tank with oxygen drawn from the atmosphere to produce electricity, that drives the electric motors that motivate the car. The only emission is clean water! Not only is that .impressive, but the Mirai is has a driving range at an incredible 674 kilometres and only takes five minutes to fill a full tank of hydrogen!

Power is rated at a modest 151 hp and 247 lb-ft of torque.  The transmission is  via a  one-speed direct-drive system to the rear wheels,  and there is still an electric  battery component that aids the Mirai in all-out acceleration. Note that there are only a handful of hydrogen filling stations in B.C for now.

Interior wise,  there is a suitably futuristic design to echo the exterior, with curvy elements on the dash and door panels. Nice  carbon- fibre look  trim pieces, cool copper colored accents and capacitive-touch console switches highlight the dash with its  big touchscreen, and all-digital instruments. There is plethora of soft touch premium materials and expected luxury touches. You can fit four people inside in relative comfort, the front seats are roomy and supportive, but the  rear does not have a middle seat. However, you do gain: cup holders, power outlets (both USB and 12V), climate control vents, seat heaters, and a big armrest console bin. The compartment for the trunk is reasonably roomy at 362 L. White trimmed seats and dash pad gave the Mirai a far more luxurious air than previous models. 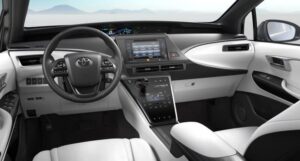 On the road, the Mirai drives very much like an EV with  just some whooshing and whirring from the hydrogen system. Acceleration is instant due to the electric motor format and actually feels faster than the  modest with a 0–100 km/h at about 9- seconds  Toyota claims.   The Mirai is a relatively heavy car and  feels it, with a very solid, stable planted feel. It does  have a good degree of agility in the corners where the weight enables it to remain composed with a real big car-like smooth and refined ride on all surfaces. Toyota claims a combined fuel consumption rate for the Mirai of 0.93 kg of hydrogen per 100 km or compared to gasoline cars – L/100KM at 3.1/3.3 (City /highway.),  which is excellent.

The Mirai is a big, luxurious car with Lexus like road manners and refinement It’s not super fast but makes up for that in refinement and comfort. Powered by a bountiful hydrogen, the Mirai needs no fossil fuel whatso ever! Producing only pure water.as a by -product!

A decision on buying the Mirai however need to be carefully weighed up. Unless you are close to one of the hydrogen filling stations, it needs thinking about. But the hope is that as the hydrogen filling station infrastructure become more common the Mirai will be the contender for the greenest car on the planet. A wonderful fuel efficient, luxurious vision of the future right here and right now.