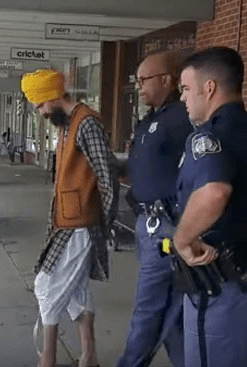 Washington (PTI): A 33-year-old Sikh convert was handcuffed and arrested in the US for carrying a kirpan after a customer at a grocery store called police.

Harpreet Singh Khalsa, who was born as Justin Smith, has worn the ceremonial knife known as a kirpan every day since he converted to Sikhism nine years ago.

Khalsa, who owns a catering business, was quoted by The Baltimore Sun as saying that he has been stopped multiple times by police, and was arrested again last week outside a grocery store in Catonsville, Maryland, after a customer called police.

Khalsa said he explained to the officers that the knife is part of his religion, but they frisked him, took the kirpan, placed him in handcuffs and drove him to the local precinct.

Khalsa was later released without charges, after police “confirmed that the knife was a kirpan and part of his religion, and not a threat to the community,” Baltimore County Officer Jennifer Peach was quoted as saying.

“The officer did follow all Maryland and county laws properly in this incident. There is no known exception to the deadly weapons laws at this time,” Peach said.

She said the department is providing education and guidance to its officers about Sikhs and their culture.

“This incident clearly illustrates that this is an increasingly diverse county, and BCoPD (Baltimore County Police Department) works hard to understand and respect the many cultures that call Baltimore County home,” Peach said.

Stressing on the importance of the kirpan, Khalsa said, “We don’t consider it a knife, but a visual reminder to stand up to justice.”

“The kirpan obligates a Sikh to the ideals of generosity, compassion and service to humanity,” Harsimran Kaur, legal director of the New York-based Sikh Coalition, was quoted as saying.

“It acts as a reminder to its bearer of a Sikh’s solemn duty to protect others and promote justice for all,” she said.

Khalsa said he was shopping on Monday when police approached him, walked him out of the store and took his kirpan.

Rachel Bereson Lachow, a witness to the incident, captured the arrest on video and posted it to her Facebook page. The 54-second video has been shared 1.6 million times and received hundreds of comments.

Lachow said she watched Khalsa leave the store with police. She said the officers told him to keep his hands away from the knife until they removed it from him.

Lachow said she hopes the video will raise awareness.