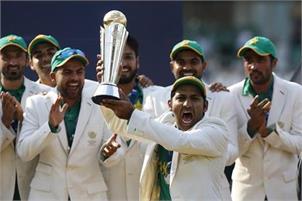 London (PTI): An inspired Pakistan hammered a blundering India by 180 runs to lift the ICC Champions Trophy, riding on a scintillating hundred from rookie opener Fakhar Zaman and a sensational bowling spell from Mohammad Amir.
This is Pakistan’s first ICC title triumph since their 2009 World Twenty20 win but more importantly it broke the jinx of not performing against India in big ticket matches.
For a team that can t play international cricket at home due to security issues, the victory has far-reaching implications.
If Zaman announced his arrival in international cricket with a match-defining knock, Pakistan cricket s enfant terrible Amir finally managed to sing a redemption song that he has been longing for.
It was a charged-up performance from Sarfraz Ahmed’s underdog team with left-handed opener Zaman, after a lucky reprieve, scoring a pulsating 114 in their imposing 338 for 4.
Amir (6-2-16-3) then tormented the Indian batsmen with a devastating first spell and eventually the defending champions were bundled out for 158 in only 30.3 overs.
The match turned out to be one of the most nightmarish under Virat Kohli’s captaincy.
It was a match where everything went awry for the Men in Blue from the time Kohli went out for the toss.
On a flat deck, Kohli surprised everyone opting to field, a decision prompted by the current team s ability to chase any target.
It started on a wrong note when a beautiful delivery from Jasprit Bumrah was nicked by an edgy Zaman only to be called no-ball due to overstepping. Zaman scored a ton.
The two spinners Ravichandran Ashwin (0/70 in 10 overs) and Ravindra Jadeja (0/67 in 8 overs) were then taken to the task with not a single wicket-taking delivery being bowled by the duo.
With no assistance from the pitch, their limitations were thoroughly exposed against batsmen, who were ready to use their feet.
Rohit Sharma (0), Shikhar Dhawan (21) and Virat Kohli (5) were snuffed out by Amir in a devastating first spell with three brilliant deliveries. The fate of the match was sealed.
Hardik Pandya smashed 76 off 43 balls, hit half a dozen of sixes to provide some entertainment, before being run-out due to a horrible mix-up with Jadeja. Pandya was livid but he was only delaying the inevitable.
As the final wicket fell, Oval, immersed in a sea of green , was euphoric in its celebration along with those eleven on the field.
The victory was achieved by one of the most unglamorous outfits under one of the most unassuming captains in the history of Pakistan cricket, Sarfraz, and he deserved it more than anyone else for showing the composure one expects from model captains.
Earlier, playing his first ODI tournament, the 27-year-old left-hander got a “life” when he was batting on four as Bumrah overstepped while MS Dhoni took a simple catch behind the stumps.
Zaman made full use of the opportunity to punish the Indian attack on a day when it mattered most.
Along with senior pro Azhar Ali (58 off 71 balls), Zaman set the platform with a 128-run partnership for the opening wicket and consolidated it further with a whirlwind 72 off 63 balls with Babar Azam (46 off 52).
By the time Jadeja took a well-judged catch off Hardik Pandya to remove Zaman, the team’s total had reached 200.
The final flourish was provided by veteran Mohammed Hafeez (57 off 37) with help of four boundaries and three sixes. He added 71 for in 7.3 overs with Imad Wasim (25 no off 21).
To add insult to injury, India bowled 13 wides and three no-balls in what was a woeful day for all, save Bhuvneshwar Kumar (1/44 in 10 overs).
Ashwin and Jadeja got a pounding from Zaman, who would clear his front leg and muscle the deliveries through on-side, occasionally hitting the inside out shot through extra cover.
He got a few streaky boundaries upfront but then settled in to give each Indian bowler, a mighty thwack.
There was no looking back after that and was liberal help from all the Indian bowlers, who erred in length, gave away needless extras to release the pressure completely.
In humid conditions and on flattest of decks, Kohli decided to field first but his bowlers did not do justice to the faith he had shown in them.
Especially both the spinners looked clueless with no help from the pitch. Zaman and Azhar were ready to use their feet and with no turn on offer whipped them on all parts of the ground with ease. In between the two lead spinners, they were hit for 12 boundaries and five sixes.
The second powerplay (overs 11-40) were fully utilized by Pakistan, who scored 191 runs and bulk of those came off the spinners.
Jadeja was guilty of not varying his pace. He bowled too quick and too flat which made strokeplay easier.
Zaman ‘s batting didn’t have the grace that one normally associates with left-handers but on a true pitch where hitting through the line was easy, it suited his style.
The best part about Zaman was his ability to find the boundary at ease during the second powerplay.

“Not just today, not just tomorrow, this day will be remembered in Pakistan for years to come,” said a beaming Pakistan captain Sarfraz Ahmed as he made a passionate plea to other nations to play international cricket in their country.

No major cricketing nation has toured Pakistan since the terrorist attack on Sri Lanka team back in 2009.

“It was a great achievement by the boys and full credit to them. Everyone will remember this achievement, not just for today or tomorrow but for a long, long time in Pakistan cricket. The boys were really motivated today. We came here as a number eight ranked team and won the tournament. Hope all nations now come and play cricket in Pakistan,” Sarfraz said at the post-match press conference.

INDIAN captain Virat Kohli said Fakhar Zaman’s cavalier approach was difficult to counter as 80 percent of his “high risk shots” came off well during the Champions Trophy final against Paksitan, here on Sunday.
Zaman’s 114 led Pakistan to a commendable 338 for 4, which they defended successfully.
The Indian captain admitted that the rookie left-hander s approach did upset the rhythm of his bowlers after he got a reprieve off a Jasprit Bumrah no-ball .
“When a guy like Azhar Ali, who is a conventional batsman, plays his shots, you can still have a plan. But for a guy like Zaman, it becomes really difficult to stop players like him, because I think 80 per cent of his shots were high- risk and they were all coming off.
“So you can only do so much, as I said, as a bowler and as a captain when that is happening, Kohli did sound a tad helpless trying to explain Zaman s performance.
“Sometimes, you have to sit and say, the guy is good enough on the day to tackle anything. You can only do so much. As I said, you can do little to control when people are going well like that, and we certainly tried to make them hit in areas that we felt it would be uncomfortable, but we just didn’t have anything going our way in that partnership (Zaman-Azhar). We tried our best to hit good areas but they just batted really well today,” said Kohli.
The Indian captain conceded that they needed to check the extras, 13 wides and three no balls.
“The extras are something that’s never a good feeling to concede so many. That is something that we need to keep a check on. You know, those things are something that are controllable. A guy hitting a good shot is something that after a stage it s not in your control as you have already bowled the ball but conceding extras is something that we can control as a team,” he said.
“I mean, 25 extras is a bit too much in a game like that, and that ‘s something that we certainly need to take care of in the future. Obviously, the same bowlers are going to play, the same guys are going to bat. But the more consistent you get in learning from games like this, it’s better for the team in the future. So yeah, that’s an area we certainly need to look at.”