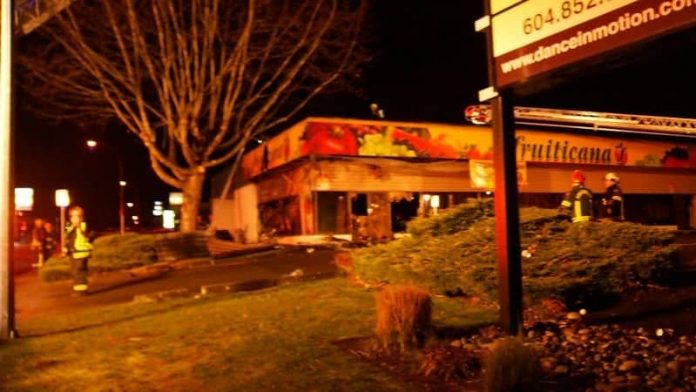 AFTER an extensive investigation, Abbotsford Police Department Major Crime Detectives have charged two men in connection with the December 2017 arson at the Fruiticana Grocery Store on Bourquin Crescent.

Scott Kenneth Campbell, 43, and Stephen Turner, 44, have been arrested and charged with arson. Neither of them is from Abbotsford.

Inspector Tom Chesley, Officer in Charge of the APD Criminal Investigation Branch, said: “The Abbotsford Police Department is committed to investigating offences which impact public safety and investigators are looking forward to advancing this file through the courts.”

Investigators said they would like to thank everyone who called in their observations and provided assistance on scene.

ON December 15, 2017, at 4:15 a.m., a witness observed flames and smoke coming from a recently renovated business in the 2700-block of Bourquin Crescent. Abbotsford Fire Rescue Service crews battled the blaze which consumed a portion of the building and caused substantial smoke and water damage to the structure. 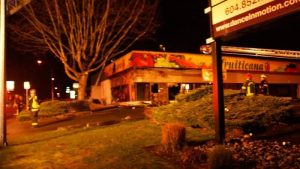 Sgt. Judy Bird told The VOICE at the time that a Fruiticana grocery store was being set up in the building.
Shortly before the 911 call, five individuals, at least one of whom was a female, were observed throwing rocks at the windows of this business.
The witness immediately dialed 911 to report the fire. The witness also advised that the same suspects were last seen running westbound on Ventura Avenue after the fire began.

A few days later, police said they looking for a vehicle of interest that was captured by area video surveillance. The vehicle was believed to be a light-coloured 2000 to 2006 GMC Yukon with a faulty right brake light. Police released some photos of the vehicle. They said they were looking for information about that vehicle, its owner and any occupants the morning of the arson. Police were also looking for additional witnesses who had not yet spoken with police but were at the scene and filming the fire on their cell phones.