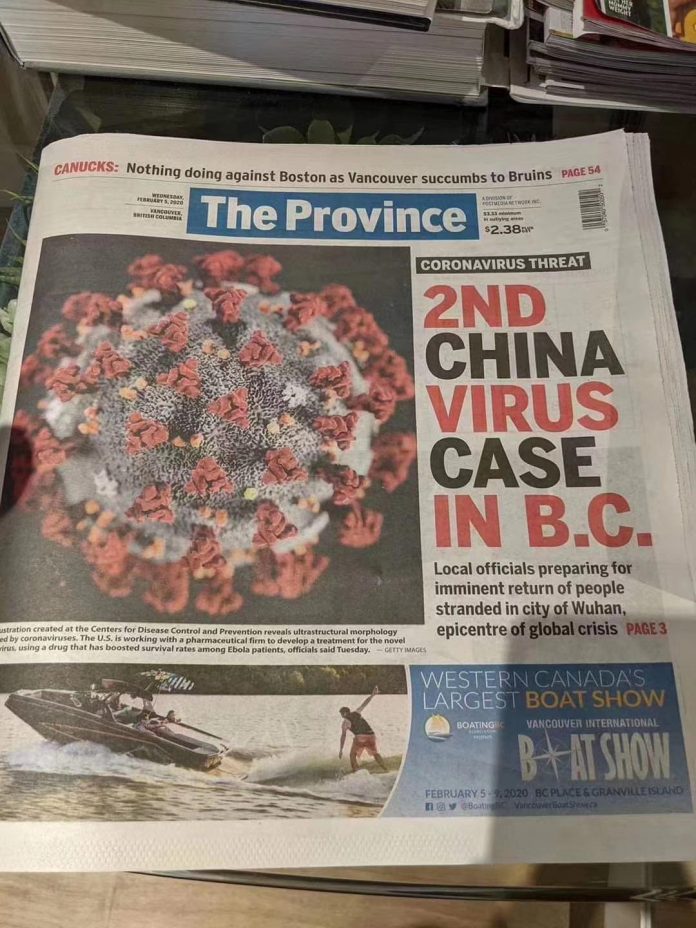 BC Liberal Leader Andrew Wilkinson on Wednesday slammed The Province newspaper for giving the corona virus a racist angle with this heading on its front page on February 5: “CORONA VIRUS: 2ND CHINA VIRUS CASE IN B.C.”

Wilkinson tweeted: “This is beyond disappointing to see this sort of thing happening in British Columbia. We don’t stereotype and fear monger in the face of a health scare. We need to work together to fight the virus, not each other. Together we are so much stronger.”

MLA Ben Stewart tweeted: “Sad to see the media sensationalizing and calling this health epidemic something other than H1N1 influenza or novel corona virus.”

Lynn Hutton put it best when she tweeted: “@theprovince has gone down hill as of late. Honestly I don’t remember the last time I picked one up…it’s just too irrelevant.”

Chinese Consul General Tong Xiaoling in a statement online said: “On February 5, on the front page of “The Province”, it referred to the novel coronavirus as “China virus”. We strongly oppose and condemn the use of such discriminatory words. The World Health Organization defines this virus as “the novel coronavirus”, which is a scientific terminology that has been adopted internationally. The Province’s erroneous use of words with obvious racial discrimination on its headline on the front page is extremely unprofessional, which not only counters the recommendations of the World Health Organization, but also reflects this paper’s arrogance, prejudice and discrimination. This is inconsistent with the Canadian core values as “The Province” has always professed, as well as journalistic ethics. We demand that “The Province” immediately apologize for its mistake and stop using similar language.”