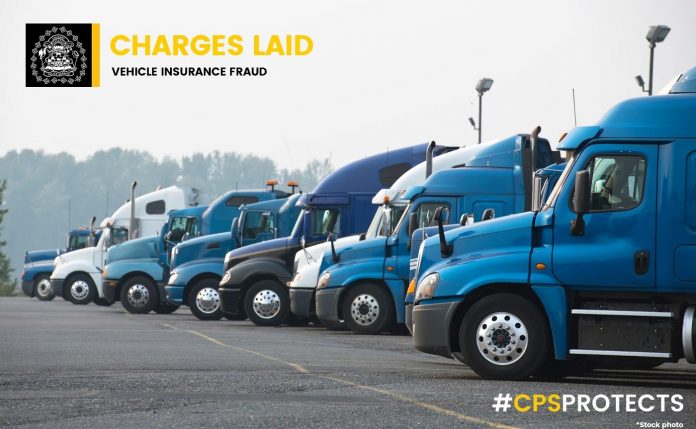 HEADING into Fraud Prevention Month, Calgary Police Service announced they have laid charges in a complex vehicle insurance fraud scheme that dates back to 2009 and involved semi-trailer trucks.

In 2019, police noticed an increase in semi-trailer truck thefts from previous years. Calgary Police officers also noted that a significant amount of these semi-tucks hadn’t been recovered, which was considered unusual for auto theft investigations and can be an indicator of insurance fraud. On average, Calgary Police recover nearly 90 per cent of all stolen vehicles.

Auto theft detectives launched an investigation and identified that one Calgary company, Lakha Trucking Ltd., had reported numerous vehicles stolen since 2009. After a thorough investigation, police determined that each one of the reported stolen vehicles had never actually been stolen. It is alleged that the company reported the vehicles stolen to receive an insurance payment and then re-vinned the original vehicles. Re-vinning is the process of replacing a vehicle’s Vehicle Identification Number (VIN) with a fraudulent VIN in an effort to hide a vehicle.

The re-vinned vehicles were then sold for profit or used to commit additional frauds. In some cases, offenders received multiple insurance payments for the same vehicle by reporting it stolen, re-vinning it, and then repeating the process again.

Financial gain as a result of insurance payments and sales of the stolen vehicles is estimated to be more than $350,000. Police believe that at least eight vehicles were used to complete the frauds.

Lakhbir Singh Dhaliwal, 52, of Calgary is charged with one count each of fraud over $5,000, uttering forged documents, public mischief, trafficking in stolen property and tampering with a motor vehicle VIN. He will next appear in court on Thursday, April 9.

Nasib Kaur Dhaliwal, 52, of Calgary, is charged with one count each of fraud over $5,000 and uttering forged documents. She will next appear in court on Thursday, April 9.

Baltej Singh Dhaliwal, 56, of Calgary is charged with one count each of fraud over $5,000, uttering forged documents and trafficking in stolen property. He will next appear in court on Thursday, April 9.

Investigators thanked their partners in the RCMP, Alberta Transportation and Service Alberta for their assistance with this investigation.

“This is a concerning trend for many consumers who are facing high insurance premiums, While a majority of the cases we have investigated centre on high-value commercial vehicles, we know that these types of frauds are also happening with personal vehicles,” said Staff-Sgt. Graeme Smiley, CPS District Support Unit.

Anyone with information about vehicle insurance fraud is asked to call the non-emergency number at 403-266-1234. Tips can also be submitted anonymously to Crime Stoppers through any of the following methods: