Home Breaking News Can you help identify this suspect in a sexual assault investigation in...
Facebook
Twitter
WhatsApp
Email 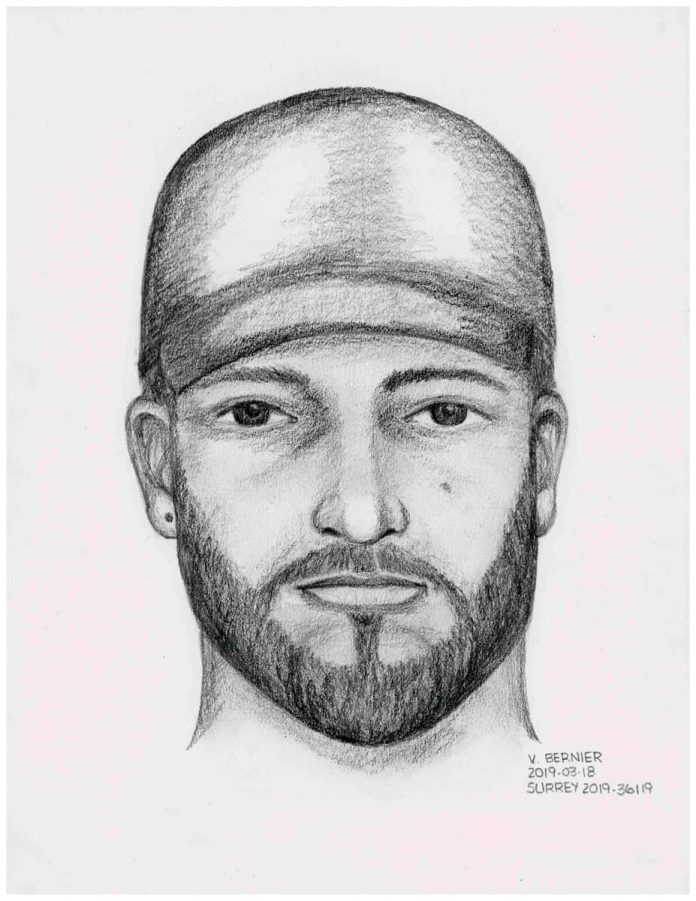 SURREY RCMP on Friday released two composite sketches of a suspect in a sexual assault which occurred in the Newton area on March 13 at approximately 9:30 p.m. in which a woman was grabbed from behind and groped by an unknown man as she was walking northbound on 124th Street near 72nd Avenue.

The woman was able to get away from the man, however, he followed her to her front door and attempted to assault her again. The female managed to get inside her residence without him doing so. The man was last seen heading southbound on 124th Street.

The male suspect is described as 5’10” tall, with a skinny build and a short black beard. His ethnicity is unknown. He was wearing a black baseball hat and a long black jacket with a creamed coloured shirt underneath. The public is requested to look at the composite sketches and call police if they can help to identify this person.

The Surrey RCMP Special Victims Unit has taken conduct of this investigation and investigators are making an appeal for any witnesses to come forward with information. They are also requesting anyone who may have been driving in the area, or who may have dash cam video from the area at the time of the offence, to come forward.

“Incidents like this are not only upsetting for the victim, but also for the community,” said Cpl. Elenore Sturko. “We are encouraging anyone with information that can help us in this investigation to come forward.”

Surrey RCMP is providing tips to the community regarding personal safety precautions:

* Tell someone where you are going and when you will be back.

* Phone home when leaving a friend’s house and say when you will be home.

* Trust your instincts and your feelings.

* Phone if you are going to be delayed, or if your plans change.