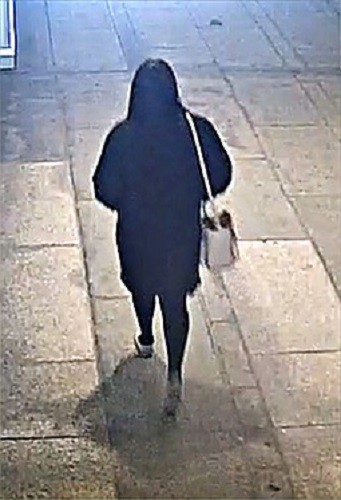 BURNABY RCMP on Thursday released a video of an assault on a 84-year-old woman that took place last month on April 3.

The video shows the suspect approached the elderly woman and tripped her as she walked on Central Boulevard near Metrotown Skytrain Station in Burnaby.

The elderly woman was shaken, but fortunately was not seriously injured. While the suspect’s face is not clear in the video, police are hopeful that those who know the suspect may recognize something from the video that will assist them in identifying her.

Why the RCMP took so long to release this video is not known.

– Possibly Asian female
– Wearing a face mask
– Dark brown hair
– Wearing black tights, long dark puffy jacket and light shoes
– Carrying a beige purse
If you have any information that would assist investigators you are asked to contact Burnaby RCMP at 604-646-9999 or, if you wish to remain anonymous, contact Crime Stoppers at 1800-222-TIPS or visit www.solvecrime.ca

At this time, police say they do not have any information to indicate that the Asian victim was targeted based on her ethnicity; however, based off what is currently being observed taking place in neighbouring municipalities, it is an active investigative avenue.

RCMP say that in accordance with their bias-free policing policy, they do not collect race or ethnicity data related to specific offence types for statistical purposes. However in recent weeks, they have noted some concerning incidents in which members of the Asian community in Burnaby have been targeted. Burnaby RCMP have responded to calls for service in relation to victims who were subjected to racial slurs and others where a business had racist graffiti sprayed in and around their premises.

“There is no place for crimes of this nature in our City,” said Chief Superintendent Deanne Burleigh, Officer-in-Charge, Burnaby detachment. “We want every resident of Burnaby to know that our officers are diligently investigating every complaint being made to us.”

Burnaby RCMP say they have stepped up foot and bicycle patrols in crime hotspots across the City in recent weeks and are asking for continued vigilance from the community in reporting any crimes targeting members of the Asian community in the City.

Burnaby RCMP: Man believed to be involved in ongoing threats and intimidation investigation