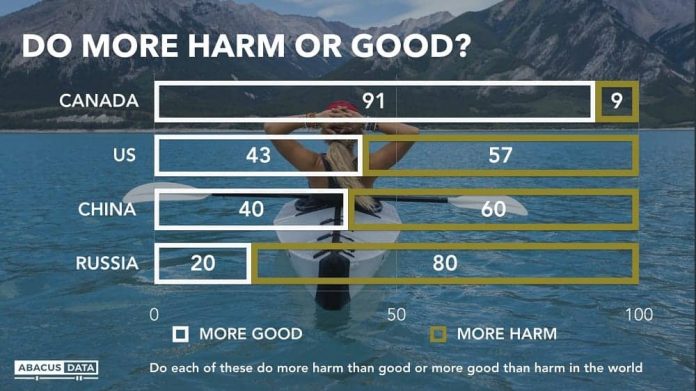 WE asked people whether they thought Canada and several other countries were doing more good for the world or more harm.

Canadians are almost unanimously that our country does more good than harm in the world.

The majority feel the US does more harm; results are almost identical for China.

A broad 80% see Russia as an unhelpful force in the world today.

While issues, generations, gender, regional tensions and political philosophies can lead to disagreements within Canada, on this simple test – do we as a country do more good than harm – there was plenty of pride on display. 90% of each age group say we are a force for good. Men and women are only 3 points different. And more than 85% in every region feel this way.

And, for the politically inclined, it’s worth noting that the differences on this question are small – only 7 points from Liberal voters (94%) at one end and Green Party voters (87%) at the other.

The results for the US are striking – many no doubt see the actions the US is taking under the Trump administration as an aberration for America – but a problem for the rest of the world nonetheless. The results for Russia signal that Canadians are likely skeptical of the motive behind and the prospects for a useful outcome for the world from an upcoming Trump-Putin summit.