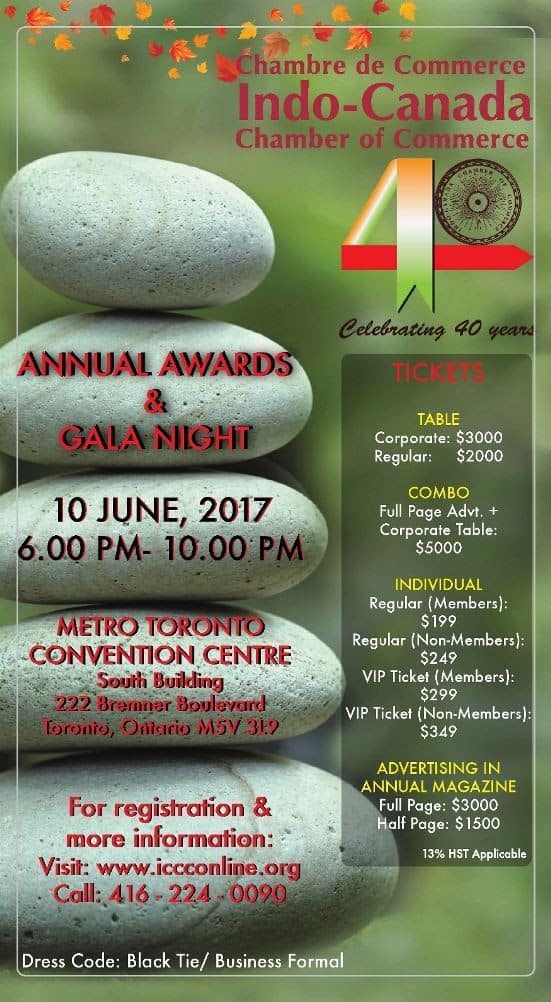 THIS year, the Indo-Canada Chamber of Commerce (ICCC) celebrated its 40th year and the 25th anniversary of its annual awards.

Balwinder is the President and CEO of Chalmers Group of Companies for the last fourteen years, which has manufacturing plants in Ontario, BC and the USA. She is also the chairperson of the board of directors for all of Chalmers’ associated companies. Under her leadership, Chalmers Group has emerged as a global OEM supplier of transportation and medical equipment, acquired two new companies and diversified into real estate. Balwinder is actively involved in the community and has served on the Board of Sheridan College, Peel Children’s Aid Society and as an advisor to a community school. During her spare time, she has contributed generously as a volunteer at local long-term care centres, as well as religious and political organizations.

Ray Gupta founded the Sunray Group in 2006, Sunray Group is a family owned, multifaceted corporation specializing in hospitality and development. The group is successfully building an ever-increasing portfolio of award-winning brands, which include partnerships with Marriott, Starwood, Radisson, Best Western, and Choice Hotels. It has developed prominent global and Canadian brands. Sunray Group owns and operates 30 hotels and employs over 1,500+ talented individuals across Ontario and Quebec with many new developments on the horizon. The Sunray Group holds the top position among privately owned hotel groups in Canada. The Group has been the recipient of many awards including the top 10 Hotel Groups in Canada and was awarded the Pinnacle Award as Regional Company of the Year in 2016.

Dr. Indra Narang is the Director of Sleep Medicine at the Hospital for Sick Children in Toronto. She also holds simultaneous appointments as an Associate Professor at the University of Toronto and a Senior Associate Scientist with the Sick Kids Research Institute. Dr Narang is a recognized leader in the field of Sleep Medicine and has developed the largest and most comprehensive paediatric Sleep Program in Canada. This program has advanced the clinical care and treatment of sleep disorders in children. Dr. Narang has also developed a state of the art clinical research program. In 2015, Dr. Narang was invited to be the chair of the paediatric section of a Canada wide sleep network, the Canadian Sleep and Circadian Network.

Anil Arora came to Canada from India at the age of 11 and after a stint in the private sector, he found a calling with the federal government. As he progressively took on positions of greater responsibility, his vision has been to use leadership positions to bring greater prominence and inspiration and build high-performing diverse and inclusive teams who can in-turn serve a rich and diverse Canadian society. Anil has been recognized for his contributions by the Association of Professional Executives with a leadership award, by the Canada India Ottawa Business Chamber as well as been on the A-list for the last two years. Anil mentors and coaches a number of upcoming leaders in the public service, ensuring diversity exists at all levels.

Sameer Sharma graduated from University of Toronto with Honors Degree in Bachelor of Commerce in 2013 and was the Director of Marketing for the University’s Commerce Society. He connected students with various Fortune 500 companies in order to allow his peers to gain an understanding of the practical implementation of their academic knowledge and promote graduate employment. Following graduation, Sameer helped create his family business as Vice President of hospitality operations known as Crown Group of Hotels, which at the time had one hotel. In 2014 to 2016 the company saw further growth as they acquired four more hotels and now own and operate five hotels under internationally known flags such as: Marriott, Hilton, Best Western and Choice.

Peter Dhillon is the CEO of the Richberry Group of Companies, an agribusiness enterprise with operations in British Columbia and Quebec. The Richberry Group consists of cranberry companies, which combined, are one of Ocean Spray Cranberries largest shareholders and suppliers. Dhillon is Chairman of the Board of Directors of Ocean Spray Cranberries Ltd. – the youngest and first Canadian to hold the position. Peter is known for giving back to the community with his philanthropic and charitable service, including health care, child humanitarian support, education and sport. In 2009 he was honoured with The Order of British Columbia in recognition of his services. In partnership with the Sauder School of Business the Peter P. Dhillon Centre for Business Ethics was established recently.

Mina went from being persecuted and expelled from Uganda and living in a refugee camp to sharing her time with humanitarian organizations at the forefront of empowering communities. Mina’s early years as a refugee shaped a strong determination to become an empathetic and inspiring leader, deeply committed to helping others, with a strong devotion to the not-for-profit sector. Her early struggles ignited a passion to help disadvantaged communities. As an Advisory Board Member for the UN Women National Committee Canada, Mina supported the work of the United Nations in its efforts to empower women and achieve gender equality worldwide. As an evaluator for The Loran Scholars Foundation, Mina helped identify and support exceptional young Canadians who demonstrate character, service and leadership to grant scholarships for undergraduate studies.

Pradeep Sood is a highly-respected entrepreneur and community builder. He is a tireless champion of both the not-for-profit and business sectors. Strengthening inter-cultural relations has been one of his aspirations and something he has been working on since arriving in Canada nearly three decades ago. In one of his roles as Chairman and co-founder of Highbury Canco Corporation, Pradeep has become to be known as a “tomato guy.” In the three years since his group purchased the Heinz plant in Leamington, Highbury has become an efficient food processor, generating over 500 jobs and processing over 300-million pounds of tomatoes annually. Pradeep has the distinction of being the first Canadian who has been Chairman of both the Ontario Chamber of Commerce and President of the Indo-Canada Chamber of Commerce.

Member of the Year: Jatinder Bawa

Jatinder Bawa is more than just an accountant with over four decades of work experience. He is a Chartered Accountant from India, a CPA from the United States, and a CGA from Canada and has worked internationally in India, Middle East and Canada. In addition to being an accomplished accountant, Jatinder is a devoted family man and a leader within the community. Over the last decade Jatinder has volunteered his to support the seniors, women and new immigrants. He also helps seniors with information on Canadian Taxes and helping them with queries regarding their tax returns. He taught accounting to women at the Community for Women Settlement Program and at Microskills for Women and helped many obtain gainful employment or launch successful entrepreneurial endeavours.

The President’s Award was not awarded this year.

SouthAsianFest2019: The South Asian Festival kicks off for its 11th year