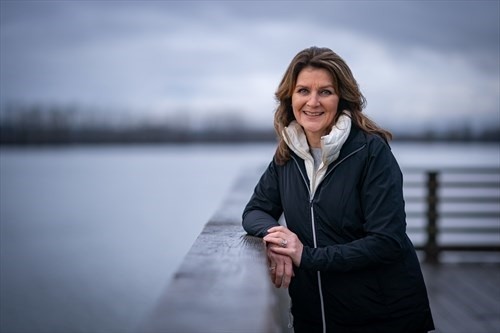 THE BC Liberals have officially nominated Cheryl Ashlie as the party’s candidate in Maple Ridge-Pitt Meadows for the next provincial election.

Ashlie’s nomination was confirmed on Saturday by a packed room of party members. The former three-term school trustee and two-term city councillor, who was named Maple Ridge Citizen of the Year in 2017 for her community-building volunteer leadership, will start working right away to earn the support of local residents.

Alongside BC Liberal Leader Andrew Wilkinson, speakers in support of Ashlie’s candidacy at the meeting included Maple Ridge councillors Judy Dueck and Ahmed Yousef. Many attendees, including Ashlie, were taking a short break from filling sandbags for homes affected by heavy rainfall in the area.

“Our approach to winning the next election is simple – nominate great candidates who understand their communities, work hard, listen to voters, and believe in opportunity for all of BC,” said Wilkinson. “Cheryl is the perfect example of the renewed team we’re building – combining experience and a heart for her community with a fresh perspective and incredible work ethic.”

Maple Ridge and Pitt Meadows deserve an MLA who will stand up for them, bring their voices to the Legislature, and deliver investments in our health care and schools,” said Ashlie. “I’m proud to be joining Andrew Wilkinson’s renewed team and launching our campaign to give our communities the strong representation they need.”

The BC Liberal nomination in the neighbouring riding of Maple Ridge-Mission is currently open, and a candidate selection meeting date will be set in the coming weeks.

ASHLIE was elected two times to Maple Ridge City Council, and served three terms on the Maple Ridge-Pitt Meadows School Board, where she advanced education improvements for children and families. A mother of three children who attended local public schools, she has also been an active PAC member.

Her dedication and leadership in education, health care, and community advocacy earned her the Maple Ridge Community Foundation’s annual Citizen of the Year Award in 2017.

Currently working as a project manager in family medical services, Ashlie is president of the Alouette River Management Society – a non-profit organization dedicated to the protection of the Alouette River watershed and serves on the Ridge Meadows Education Foundation board of directors as secretary. She has taken on volunteer leadership roles in the Maple Ridge-Pitt Meadows Community Services, the Substance Mis-Use Prevention Task Force, the 2009 BC Disability Games and volunteered with annual events such as the Terry Fox Run, MS Walk/Run, and Ridge Meadows Hospice Vista Run.

Ashlie’s deep experience working for the betterment of her community gives her a unique and detailed perspective on the issues and opportunities facing residents in Maple Ridge-Pitt Meadows.

Cheryl Ashlie is BC Liberal candidate in Maple Ridge-Pitt Meadows